Ypres with Kids: A Visit to Flanders Fields

In the Great War between 1914-1918, Belgium became one of the main battlegrounds between the great European powers. A trench system stretching from the North Sea to Switzerland was built in the farmland and mud of Belgium and France. The trench warfare employed by military commanders resulted in over 8 million soldiers’ deaths during the four year span of World War I.

As part of the British Empire, Canadian men enthusiastically volunteered to participate in what was assumed to be a short and glorious war. Thousands volunteered and were later conscripted to be shipped overseas to fight a war of attrition, where progress on the battlefield was measured in miles gained or lost, and men killed or swallowed up by mud. 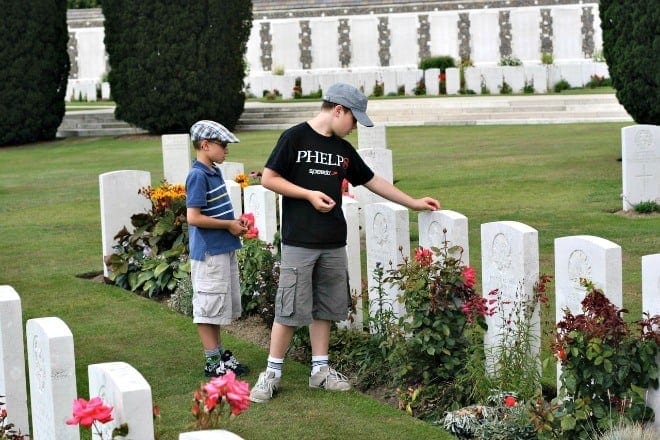 How to Visit Ypres with Kids

Historians have subsequently written that our Canadian nationhood was solidified through our soldiers’ sacrifice on these battlefields in Belgium and France. As children we learn of the names of battles and locations; Passchendaele, Ypres, Vimy Ridge, the Somme. The distance of time makes these names seem almost mythic, as these battles took place almost one hundred years ago.

Yet, these places exist and function as towns and villages in 21st century Belgium and France. But they haven’t forgotten their history. In fact, they have done much to ensure that no one ever forgets. Through the establishment of outstanding museums and the founding of monuments and cemeteries that tell the story of war. 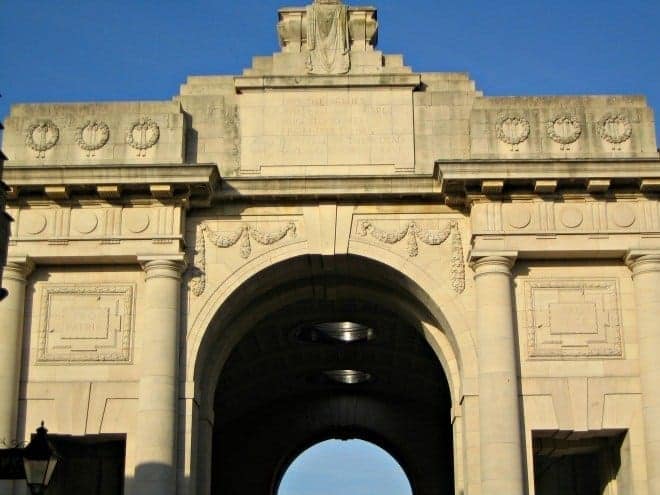 Visiting Ypres as a family

Visiting Ypres with kids is one of the best ways to introduce the difficult topic of history, warfare and the importance of remembrance with your children. In Ypres (Ieper in Flemish), Flanders, which was almost completely destroyed in WWI, the war is remembered every day. At one entrance into the city, the Menin (Menepoort) Gate Memorial bears witness to the past.

The names of nearly 55,000 missing men are inscribed in Menin Gate. They have no known graves. Their names are listed by rank, regiment and nationality. It is impossible to not be moved when viewing row upon row of names, and imagining that these were once men, or often, just teenage boys.

Every evening at 8 PM, the entrance road passing under the Gate is closed for the playing of the Last Post, in honour of the dead. This ceremony was conceived and undertaken in gratitude by the citizens of the city of Ypres. This ceremony has taken place every evening (except during WWII) since 1928 – nearly 28,000 times. 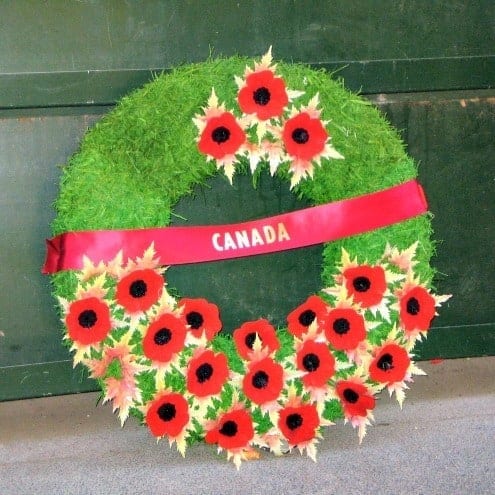 The playing of the Last Post attracts a large crowd. It’s best to get there 30 minutes in advance to view the brief but powerful ceremony.

Often, veterans groups from Commonwealth countries gather to lay wreaths to their nation’s war dead. During our recent visit we saw one such moving ceremony by a group of Australian military personnel and their families. We were also proud to view some wreaths to Canadian war dead that had been placed at the monument earlier that day.

In the town square not far from the Menin Gate is the In Flanders Fields Museum. This is an outstanding, interactive museum that appeals to all ages. Through multi-media displays and story-telling, the museum touches on war’s history. But it centers especially on the human elements of the war from every angle – orphans, refugees, medical personnel, and the soldiers. The Museum is in the Cloth Hall, which was rebuilt after the original was destroyed during the war.

There is a beautiful walk along the city wall that extends to the Menin Gate. You can view a small model of the memorial here. It is a good moment for reflection. We took the opportunity for some discussion about World War I in general with our children. They are at the age where they can understand the facts of events, but need guidance on comprehending their significance. It was a conversation well worth having.

A more difficult question to explain to one’s children is how, just over 20 years later, it all began again with World War II.

[travellingmom tip: When introducing such a difficult subject to children, I’ve found it useful to review some of the history with them, usually through books written for their age groups. Particularly if you have boys, who often play war and have great battles with knights, pirates and toy soldiers. Kids may be familiar with this topic, and are likely motivated to learn more.]