How to Enjoy 48 Hours in Vancouver

The bustling west coast city of Vancouver has been truly blessed by the nature gods. Bordered to the north by the coastal mountains and surrounded by salt and freshwater on three sides, the largest metropolis in British Columbia beckons visitors with active adventures, indigenous history and a multicultural culinary scene rivaling any city, anywhere. From vibrant public markets to large urban green spaces, lively neighbourhoods and family-friendly attractions, we’re sharing our guide on how to enjoy 48 hours in Vancouver.

How to Enjoy 48 Hours in Vancouver

If you’ve only got a weekend for visiting Vancouver BC, you know that it’s not possible to do it all. Consider this a top attractions City Guide on how to spend 48 hours in Vancouver, visiting some of the city’s ‘can’t miss’ popular destinations and diversions. (A follow-up locals favorite article is on its way.)

Vancouver’s Number One tourist attraction is a former industrial site that was transformed into a lively peninsula of public markets, artisan shops, theaters and independent restaurants. Granville Island is a wonderful place to wander and discover. It’s accessible by walking, cycling and even by False Creek ferries traveling from downtown Vancouver and Kitsilano.

Wander with your foodie finds along the scenic boardwalk around the compact island. Be sure to tuck around corners and marvel at the giant painted concrete silos at Ocean Construction. Kids will want to visit the Kids Market (naturally), as well as the large playground and waterpark in summer. Towards the eastern end of the Island, there are quieter walking paths. Here, the Granville Island Hotel is home to one of the best patios in the city.

There is no shortage of places to eat on Granville Island, including some of the most kid-friendly restaurants in Vancouver. Our favorites include; Popina Canteen, the Sandbar, Dockside (Granville Island Hotel) and the new Alimentaria Mexicana across from the public market. The many food stalls inside the Market are also fabulous for quick bites and prepared picnic items.

The city’s green heart is one of the most spectacular public spaces in the world. Located at the northwestern tip of the downtown peninsula, you can get to Stanley Park from English Bay in the West End, or from Georgia Street if heading from Vancouver towards North Vancouver.

In this urban oasis, 400 hectares of temperate rainforest provide free recreational activities like walking or biking the 10 km around the Seawall; viewing the north shore mountains, Lions Gate Bridge, English Bay and Burrard Inlets; wandering along forest paths on a guided Indigenous interpretive walking tour with Talasay Tours; or just relaxing at Second or Third Beaches.

The Park is home to several family-friendly attractions, including the popular Stanley Park Train and the Vancouver Aquarium. In summer, you can enjoy the open-air Theatre Under the Stars or Summer Cinema events (currently paused due to Covid).

While technically Grouse Mountain is not in Vancouver, it’s a popular attraction that’s easily accessible from the city. Just 20 minutes from downtown Vancouver, including a lovely trip over the Lions Gate Bridge, Grouse has loads of fun activities to enjoy for a spectacular day on the mountain.

Drive to the base of the mountain and ride the Skyride Gondola up to the Peak of Vancouver. Enjoy the beautiful views of the city before you hit the hiking trails in summer, or ski the slopes during the winter months. If you’re adventurous, you may wish to tackle the Grouse Grind to climb the 2,800+ steps and 3 km up the mountain instead. Just remember to reserve your Skyride download ticket for the journey home.

On the mountain itself, enjoy mountain ropes adventures, zip lining, and visiting with the resident grizzly bears, Grinder and Coola. There is also an entertaining Lumberjack show, and Wildlife talks with knowledgeable Rangers. The Kids Tree Canopy Adventure will appeal to kids 3-8 years old – there are treehouses, slides and grounds games for the wee ones. If you’re pressed for time during your weekend in Vancouver, plan to spend a half-day on Grouse Mountain.

During the Christmas holidays, the mountain celebrates the Peak of Christmas. Popular events include; Light Walk, Santa and reindeer visits, and the high altitude skating rink.

Places to eat: The Observatory (fine dining and the best views of the city), Altitudes Bistro (amazing nachos), Lupins Cafe and the Grind Coffee Bar.

While nature takes center stage in this outdoor-oriented city, Vancouver has its share of culture too. This is best represented in its high quality art galleries and vibrant family-friendly museums. Located in downtown Vancouver on Robson Street, the Vancouver Art Gallery showcases the best of west coast art as well as traveling exhibitions from international artists. At the University of British Columbia (UBC), the Museum of Anthropology (MOA) is world-famous for its collection of Pacific Northwest Indigenous Coast Salish art, including totem poles and long houses from Haida Gwaii and sculptures by artist Bill Reid. UBC is also home to the Beatty Biodiversity Museum, a lesser-known but stellar natural history museum that is perfect for kids.

Young (and old) crime fans will want to stop into the Vancouver Police Museum to travel through the city’s (not that sordid) criminal past, including visiting the old city morgue. Marine adventure fans will enjoy the Vancouver Maritime Museum in Kits Point, which includes learning about the St. Roch National Historic Site. The St. Roch was the first vessel to traverse the Northwest Passage from west to east (1940-1942); the first to complete the passage in one season (1944) and the first to circumnavigate North America.

Vancouver is a city of neighborhoods. While there are officially 22 hoods in the city, there are also smaller pockets of local delight that offer visitors a glimpse into the mix and makeup of this multicultural town. If you’ve only got 48 hours in Vancouver, wander through the highly walkable downtown peninsula. You’ll note the LGBTQ+ friendliness of the West End and English Bay; the international flair of Robson Street; cobbled streets of historic Gastown; and the patio-friendly urban vibe of Yaletown.

On the west side of town, Kitsilano is famous for its beaches, shopping and laid-back vibe. To the east, Commercial Drive celebrates its Italian roots while morphing into a truly multicultural district with an edge. Up-and-coming neighborhoods include the East Village along, Strathcona, Sunset on Fraser Street and Marpole, each with something different for visitors looking to go beyond the usual and beyond downtown.

Where to eat in Vancouver

Welcome to foodie city! Vancouver’s culinary scene is incredibly rich and diverse, reflecting the community and the palates of residents and visitors. From classic American burgers to spicy Chinese, world-class sushi to family-friendly dining and some of the best vegan and vegetarian fare in the world, you can experience a new cuisine every day of the year and never hit the same restaurant twice. Certainly not if you only have 48 hours in Vancouver of course!

Now that I’ve made it impossible for you to choose, here are some of Vancouver’s best restaurants, including some of our own personal favorites:

Vancouver is a young, nature-oriented and growing city by the sea. Future articles will hone in on some local favorites. We’ll uncover spots that are worthy of an in-depth visit, when schedules permit more than a 48 hour tour of Vancity.

Got a favorite spot in Vancity? Share it in the comments below. 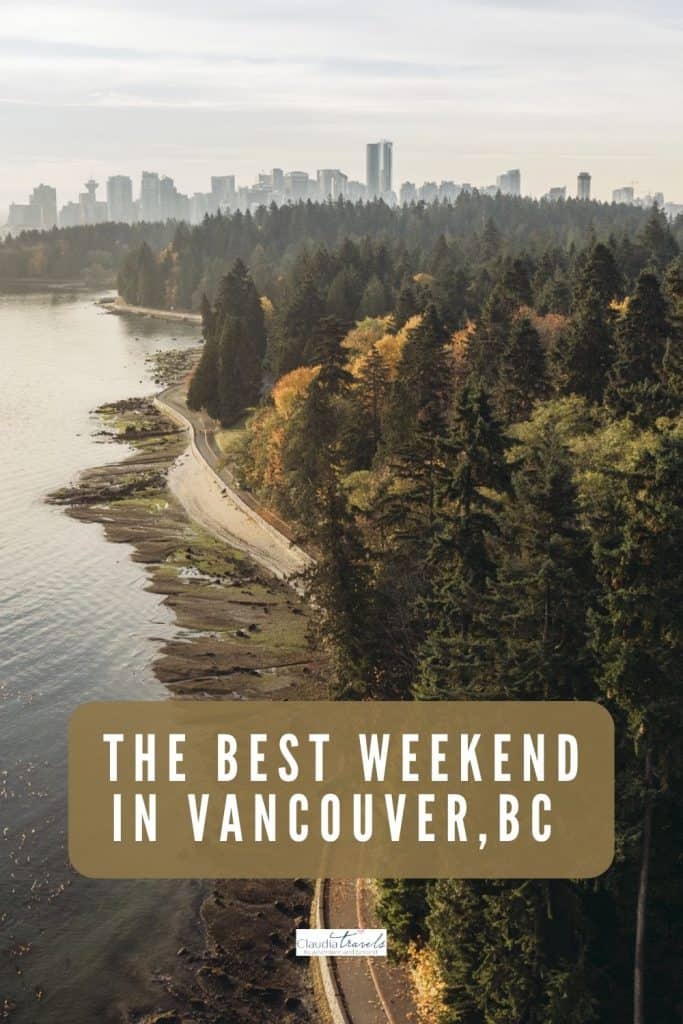