Essential Tips for Driving in Europe

The benefits of riding the rails through Europe are well known to backpackers and intrepid travelers alike. However, traveling in Europe by car offers benefits that the continent’s fabled railway systems can’t touch. Exploring Europe in a rented vehicle allows greater freedom, flexibility, and the chance to stop and go at your own pace and leisure. As experienced Euro-trippers who’ve rented cars for many holidays, we’re happy to share some helpful tips and tricks. Our essential tips for driving in Europe will help you get the most out of navigating the wonderful world of European mountain passes, narrow backroads and that thrilling autobahn.

Essential Tips for Driving in Europe

The rules for driving in European countries may differ from what you’re used to at home in the United States or Canada. But don’t be intimidated, planning road trips and driving on European roads is a fun and fabulous way to explore the countries, sites and attractions in Europe.

As you soon as you’ve booked your flights, research and pre-book your rental car from home before you leave on holiday. Not only will you have a good choice of cars and be able to compare prices on your own time, you’ll find better deals than by booking at the airport upon arrival.

When booking a rental vehicle, determine what kind of car you’ll need for your trip. Cars, parking spaces and roads in Europe are smaller and narrower than in North America. If you have a big family, you may need a passenger van or have to rent two cars to accommodate everyone. Be sure you have enough insured eligible drivers, and don’t forget to think about the trunk space needed for your luggage when considering rental car size.

If you plan to do a lot of driving, think about booking a diesel-fuel vehicle. Diesel fuel is cheaper in most European Commission countries, which will save you money on fuel costs. But keep in mind that even diesel fuel – the cheapest fuel available in Europe – is more than double the price of our lowest-grade regular fuel in North America. European fuel is also measured in litres, not gallons.

Note: Diesel fuel is more expensive (due to taxes) in Switzerland, so book a regular-fuel vehicle if you’re planning to visit this alpine country.

Want to be eco-friendly? Go electric! Just remember to note the distances between charging stations along the way.

No Passing on the right

This is completely verboten in every country we visited. Be warned: the police will nail you with a serious ticket if you get caught speeding past another car in the right lane of the highway.

The passing lane is the left lane. As soon as you are done passing someone in that lane, you move to the middle or right lane immediately. Otherwise, you risk getting rear-ended (or worse) by that Ferrari or Mercedes whipping past you at 200 kms (or more) an hour. Even when you may be going 160 km an hour.

As tips for driving in Europe go, it’s vital to remember that nobody ‘sits’ in the left lane as they slowly pass someone. Nor do drivers pass moral judgement on other drivers who are going faster than them either. Drivers in Europe pass and then immediately move to the right lane; and so should you.

If only this tradition could be grafted onto our driving culture in North America!

There are strict speed limits in Europe and they are heavily enforced by police radar and automatic cameras that will send you a ticket in the mail, even after you’ve returned home.

If you love to drive and have a car that can match your desires, Germany is driving utopia. While many roads and highways do have speed limits, when you are on the Autobahn and see 130 posted on a road sign with a slash through it, move to the right lane and watch the drivers max out their high-end vehicles in the left passing lane.

Some of the speeds traveled are astonishing (think 200 km/125 m per hour) and a little frightening. The downside of no speed limits is of course that when car accidents happen, they are catastrophic and deadly. Keep to the right except to pass, and when you do, pass quickly and safely.

You do not need an International Driving Permit to rent or drive a car in Europe; your North American license is just fine.

Nearly every country bans the use of a hand-held mobile phone while driving.

Many European countries require you to have your car headlights on any time the car is running, even during daylight hours.

Many countries require each car to carry a reflective safety vest or kit with a reflecting triangle in case of emergency. These vests and kits are usually supplied by the rental company. Check to make sure they’re in your rental vehicle when you pick it up.

No right turn on red

This is such an important tip for driving in Europe, for North Americans in particular. Across Europe, it’s illegal to turn right on a red light, unless there’s a sign specifically stating that you can do so.

This rule makes the roads safer for pedestrians, and other drivers also don’t have to worry about a car sticking half-way into the intersection trying to turn on a red light.

If driving with children, know that most countries require child-safety seats for children under age three. Several, including Ireland and Germany, require booster seats for older kids.

In nearly all European countries, children under 12 aren’t allowed to ride in the front seat without a booster seat; some have front-seat rules for kids up to age 18.

Tips for driving in Europe: Roundabouts

Ah yes, the beloved roundabout. You’ll find roundabouts, or traffic circles, in every country driving in Europe. It’s where traffic continually flows in a circle around a center island. In continental Europe, the cars move counterclockwise just like in North America.

In the British Isles and United Kingdom, the traffic flows clockwise as they drive on the left hand side of the road. If you’re traveling between the UK and the continent by car, be sure to remember the traffic flow direction – I speak from experience here.

Roundabouts work very well if you follow this golden rule: Traffic in a roundabout always has the right-of-way; entering vehicles must yield.

It’s true that for many of us, roundabouts can be stressful, high-pressure circles if you’re not entirely sure of your direction and exit. And that GPS voice isn’t always as clear about which exit is the right one either.

If in doubt, go round the roundabout once, twice, or as many times as it takes to work out which exit is correct, and work your way there as safely as possible. Having a navigator who can read signs and eliminate the guesswork can really help in these high-pressure situations.

It’s simple, don’t do it. The legal blood-alcohol content limit is lower across Europe than in North America. If you break the law, punishment ranges from steep fines to jail time. Take the DUI laws seriously.

In France, all cars must have an unused Breathalyzer on board. This is supplied if your rental starts in France, but ask about this if you’re picking up the car in another country.

Priority of the Right

This rule applies to Belgium, which has some pretty aggressive drivers. They do not always facilitate new cars merging on highways by changing lanes (cars merging have to wrestle their way onto the highway).

The priority of the right at intersections signifies that cars – and bicycles – coming from that direction have priority over you. And they will burst past you at high speeds with nary a glance in your direction.

You are responsible for ensuring that nobody is coming from the right (if the intersection is unmarked by yields or stop signs). Hence, the common sight of traffic mirrors to assist you in ensuring you are not t-boned in downtown Brussels.

A comfortable drive in the city or country, this system does not make. If in doubt, slow down when approaching unmarked intersections. Just to be safe.

The quickest way to get between two points in Europe is via the expressway – the autobahn/strada/route/cesta. While many of these fast toll roads are free, like Germany’s autobahn, on many express routes in France, Italy, Spain, Croatia and Greece, you’ll hit toll booths on route.

The cost will vary per mile/kilometre of travel, and while many are cashless systems where no coins change hands, some are still old-school. Keep some cash and coins on hand to feed the toll booths, especially those that are not attended by an actual human.

Some countries, like Austria, Czech Republic, Romania, Switzerland and Slovenia require drivers to purchase a permit sticker (called a vignette) that gets affixed to the windshield. If you’re renting a car in these countries, check with the rental company to ensure the sticker is already in the car so that you won’t have to pay extra for it.

If traveling between countries, say driving from France to Switzerland, you’ll be able to purchase the toll sticker at the border crossing. It costs approximately CHF 40 and is good for one year.

On many city and roads in countries in Europe, cars, motorcycles, and bicycles co-exist in harmony. Sharing the road is an honored and respected practice. Part of the reason may be the size and maturity of the biking culture. It’s strong, sizable and vibrant.

Commuters and students biking to work and school have priority. Bike lanes are separated from car lanes, or marked by coloured paving. Racing cyclists aren’t honked or yelled at when being passed by cars. It all seemed much more civilized and free of the anxiety and stress one tends to experience in North America.

Many historic European cities and towns are tightly packed, pedestrian-only and were built before the advent of the motor vehicle. It’s best to park your car on the outskirts of downtown. The handy paid municipal parking facilities have LED signs that display the number of free spots available, making it easy to locate a parking garage on your way into town.

Many cities in Europe, like London and Stockholm, have congestion charges and fees to discourage cars entering their cities. Others like Rome and Florence ban cars outright. If you’re staying and playing in these cities, you’ll be fine walking, biking or using public transportation; you won’t really need a car to get around.

Final word: Driving in Europe can be a memorable experience. Follow the rules of the road and enjoy the journey!

Have you rented and driven a car in Europe? What did you think about the experience? Share your comments below. 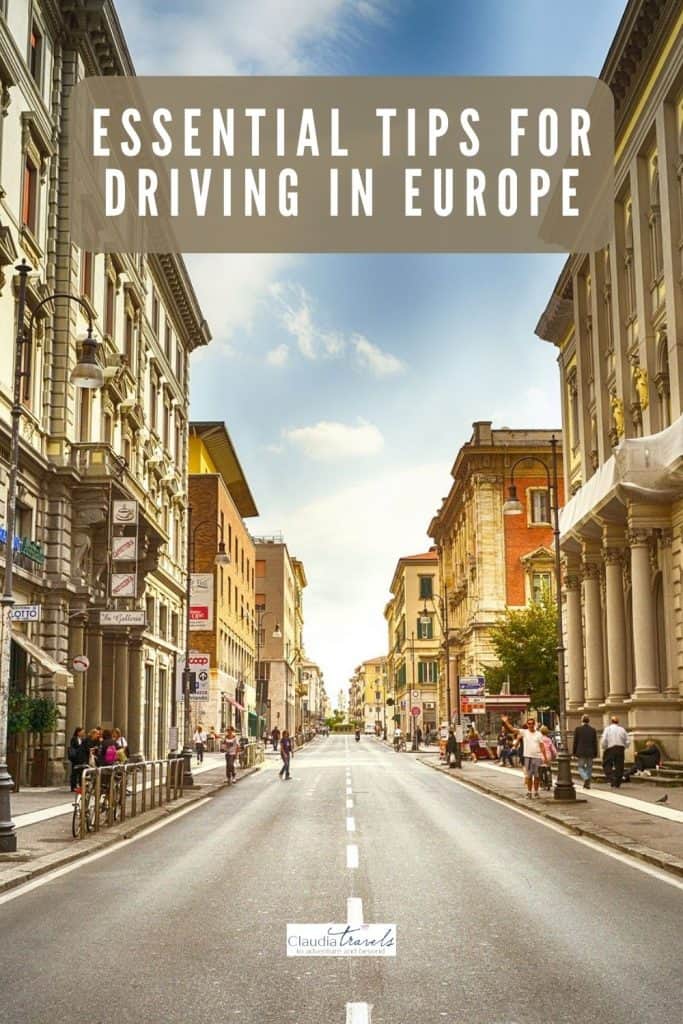 2 thoughts on “Essential Tips for Driving in Europe”