Best Things to do in Lucerne, Switzerland

Few cities are as well-situated as the Swiss city of Lucerne. The gateway to Central Switzerland, Lucerne (Luzern in German) and the region of Lake Lucerne are representative of the alpine country in miniature. With a picturesque lake and river system, soaring mountains and rolling hills stretching beyond the horizon, Lucerne is blessed with a magnificent landscape, medieval architecture, and a photogenic covered wooden bridge known the world over. Take the road lesser travelled and savor some of the best things to do in Lucerne, Switzerland.

Best Things to do in Lucerne, Switzerland

The famous Kapellbrücke or Chapel Bridge is the highly photogenic wooden covered bridge that spans the Reuss River, the outflow from Lake Lucerne. The imposing octagonal Wasserturm (water tower) which rises above the bridge was part of the city’s fortification system when it was built in the 14th century. The tower and bridge are among the most photographed monuments in Switzerland.

Both the Kapellbrücke, and the nearby 16th-century Spreuer Bridge, are decorated with painted triangular frames. The paintings feature scenes from Lucerne’s municipal and religious history. The bridges connect Lucerne’s Old Town with its New Town, which is still hundreds of years old.

While the bridge has suffered from fires over the centuries, the worst was in 1993 when a large portion was destroyed. However, this being Switzerland, the bridge was quickly repaired. It is open to visitors at all hours, day or night. This remains the oldest wooden covered bridge in Europe.

If you’re visiting on a clear day, wake up early and head to the bridge to enjoy stunning sunrise views and photos with Mt Pilatus in the background. You’ll also enjoy the added benefit of having the Kapellbrücke to yourself, free of the usual crowds.

The striking portrayal of a dying lion carved into the stone of a quiet grotto just outside of the Altstadt is a popular destination for visitors to Lucerne.

The Lion Monument commemorates the hundreds of Swiss Guards who were killed during the storming of the Tuileries Palace in Paris, France, in 1792 as part of the French Revolution. A surviving guard, grieving the loss of his comrades, returned home to Lucerne and over time, initiated the creation of the monument to the fallen men. It was inaugurated in 1821.

The monument’s setting, in a peaceful park with a reflecting pool and garden, is next to the Glacier Garden.

Travel back in time to the Ice Age and a time when glaciers covered Switzerland and most of Europe. The renovated Glacier Garden is home to ‘kettle basins’ dating back 20,000 years, as well as fossilized shells and flora from the subtropical ocean region of 20 million years ago.

Visitors can tour the open-air garden at their leisure, or by pre-booking a guide. In addition to the outdoor glacial wells, or ‘pots,’ there’s the Swiss House museum of curiosities, a mirror maze inspired by the Alhambra in Spain, an alpine park and the underground Sommerau, a winding passage of sandstone that enters into the earth and ascends up to provide some fantastic city views.

Lucerne was once protected by a stone curtain wall and 30 towers. The two rings of ramparts protecting the medieval city were built around the 13th century. Today, the Musegg Wall is about 870 m in length, with nine towers remaining, including the Water Tower at the Kappellbrücke. The largest section of these fortifications was established on a hilly strip of land north of the town, called Musegg.

Sections of the wall and several towers are open for public visits in summer; it’s a great place to admire the superb views of the city, Lake Lucerne and the surrounding mountains.

Hands down, this is one of the best transportation museums we’ve ever visited. The Swiss Museum of Transport is an interactive, multi-media immersion into the development of transportation by road, rail, air and water – even space travel is included.

The most-visited museum in Switzerland is uber family-friendly. It showcases thousands of exhibits, objects and cars, boats, and trains that can be boarded. There’s even a Swiss Chocolate Adventure located here. Take a 20-minute trip on how cocoa makes its way to becoming world-famous chocolate in Switzerland. Yes, tastings are included.

Fans of architecture will know Lucerne from an iconic building that looms over the lakefront with a presence that’s both imposing and feather-light.

The Luzern Cultural Convention Centre – KKL for short – was designed by French architect Jean Nouvel. It is home to restaurants, a convention centre and a world-class concert hall. The sweeping, cantilevered roof is akin to a large ship-like structure. Its 2,000 aluminum panels reflect the surface and waves of Lake Lucerne. Water flows into the building from the Europaplatz; the large public spaces are well-used by residents and visitors alike.

The Lucerne Carnival is one of the biggest annual festivals in the city; in fact, locals refer to it as the city’s ‘fifth season.’ It celebrates the time before the somber Christian holiday of Lent begins. Lucerne’s Carnival includes parades of people in colourful costumes, who cross the city’s bridges from all directions. They spill into the Kornmarkt to party and dance in rhythm with the “Guggenmusigen.” This is an all-ages festival that lasts until the cold light of Ash Wednesday.

The baroque splendor of Lucerne’s Jesuit Church dates from the 17th century. It is Switzerland’s first baroque sacred space. The twin church spires rise above the Altstadt along the banks of the Reuss River; the spires are instantly recognizable from anywhere in town. The church is steps from the Chapel Bridge and is worth peeking into for its bright white rococo stucco interior.

I love the opportunity to learn from the locals on a guided tour. Local guides know their cities inside and out. Learn about Lucerne’s history, its famous sights, public squares and hidden pathways; even where to enjoy apero or dinner with a view.

Lucerne’s proximity to spectacular Lake Lucerne means that boat tours of the lake and lakeside villages are very popular. Particularly in summer. The Swiss Travel Pass includes boat trips on this lake; purchase tickets from the kiosk located near the KKL. You can ride the boat for a half-day, or use it to transfer to Mt. Rigi or any number of lakeside towns and villages.

In fall, small huts of vendors selling hot roasted chestnuts are nearly everywhere in the Altstadt. Grab a bag of the rich, warm chestnuts and enjoy this real treat during the fall season, when they’re at their best.

A ‘gütsch’ is a hill, and Lucerne’s Gütsch overlooks the city and the River Reuss. It’s a beautiful place for panoramic views, and is reachable by bus or train. Sit and enjoy an apero or dinner on the terrace of the Belle Epoque Château Gütsch on a summer day. There’s also a lovely, wooded area here for walking or picnicking with the family.

High above Lucerne is the mountain escape of Pilatus. Depart the city by boat or train and then board the world’s steepest cogwheel railway for a a 30-minute ride up to Pilatus Kulm at an altitude of 2,132 m.

In addition to hiking trails and enjoying panoramic views of the Lake Lucerne region, there’s also a ‘Dragon Ride’ aerial cableway. There’s also the largest ropes park in Central Switzerland, and an imposing toboggan run. Or just drink in the view while enjoying some lovely Swiss wine on the terrace of the historic mountain or Bellevue Hotel. Prost!

All aboard for a scenic tour of Lake Lucerne; destination Mount Rigi. Board a ship at the dock located at the KKL Lucerne and enjoy a day trip from Lucerne, or a half day on the water enjoying the mountain views. Disembark in Vitznau to change transportation modes and step into the oldest cogwheel railway to the top of Mount Rigi, the Queen of the Mountains.

The Rigi-Kaltbad Hotel and Spa offers beautiful views of the lake region; it can be reached by the cogwheel or ski lift cable car. A stay at the Rigi-Kaltbad includes the opportunity to dip into the thermal waters of the Mineralbad & Spa. Taking the waters here dates back 600 years. In 2012, Swiss architect Mario Botta reimagined the spa facility. Guests can relax in the warm healing waters from the Drei-Schwestern-Brunnen spring. Hotel guests get exclusive access during the morning hours before it’s open to the public.

After a day (and night) of relaxation, head up to Rigi Kulm on that classic cogwheel railway to access hikes in summer and skiing in the winter season. From here, you can take in spectacular views of three Swiss cantons, as well as 13 lakes from the summit.

Go beyond city limits and wander along the Tell-Trail. This new long-distance trail takes hikers and trekkers through the picturesque Lucerne and Lake Lucerne region from Altdorf to the Brienzer Rothorn.

The trail can be completed in eight stages and takes in gorgeous mountain lakes, historic villages, world-famous destinations and the “Big 6” of the Central Swiss mountains: Stoos, Rigi, Pilatus, Stanserhorn, Titlis and Brienzer Rothorn. Reserving accommodations along the route is recommended during the busy summer months.

Where to Stay in Lucerne

There is no shortage of hotels in Lucerne. This historic Swiss city has a wide variety of hotel properties for every budget and size of traveling party. Check out our interactive map to help you decide on Lucerne accommodation that suits your needs.

While visiting Lucerne, we enjoyed a stay at the Hotel Wilden Mann in the new old town. The name translates to ‘The Wild Man,’ but I can attest that a stay at the 500-year-old romantic hotel is quite lovely and sedate.

The interior wrought iron staircase is a beautiful feature, and I loved the creak of the wooden floors, which must have seen quite a few things over 500 years. There are 48 rooms, and each one is beautifully and uniquely appointed in highly decorative wallpaper and period furniture. There is no air-conditioning, so note that rooms could get warm during a hot summer.

The hotel is well situated and is close to shopping, the train station, the city’s historic bridges and the Jesuit Church. There’s an in-house restaurant, and as in most Swiss hotels, an excellent buffet breakfast of hot and cold items, baked goods, cheeses and muesli is included in your stay.

Disclosure: The writer thanks Tourism Lucerne for hosting her stay in the city. As always, her opinions and love of Switzerland and wooden covered bridges are honest and her own. 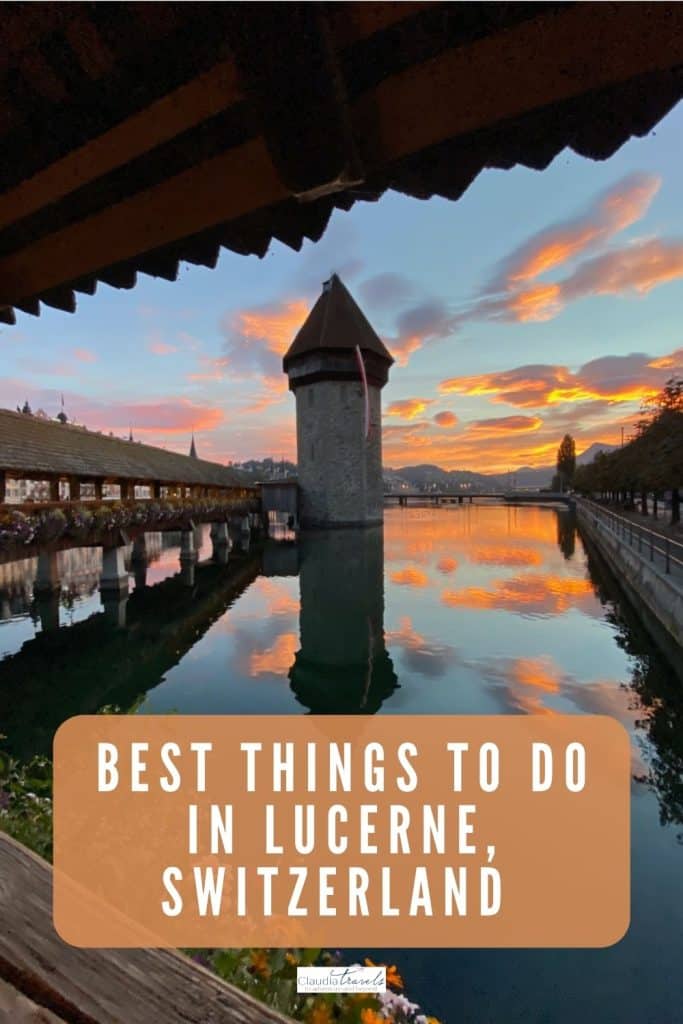