11 kick-ass things to do in Saskatoon in summer

I’m going to make a bold statement. That if you haven’t visited the prairie province of Saskatchewan, you haven’t really visited Canada.

There, I said it.

Of course, it took me fifty years to check out all the cool things to do in Saskatoon, Saskatchewan, myself, so what does that say? Well, it says that it’s never too late to enjoy the wonders of the prairies, and you should absolutely begin your exploration in Saskatoon.

Some of the nicest people I’ve ever met are from this land of big skies and wheat fields, and that’s led me to wonder whether it’s something in the water. After all, Saskatoon is the City of Bridges – there are eight over the South Saskatchewan River – and it’s also home to songstress Joni Mitchell.

As I found out during my visit, there are a surprisingly large number of things to do in Saskatoon in summer. While this is only a snapshot of 11 amazing Saskatoon tourist attractions, it’s more than enough to keep curious and adventurous visitors busy having fun saskatooning.

11 Kick-ass things to do in Saskatoon in summer

Before we get into the cool stuff, a note about where is Saskatoon. It’s in the Canadian province of Saskatchewan, along the Yellowhead Highway, 2 hours flight from Vancouver or 3.5 hours from Toronto. Founded in 1882 as a temperance colony, Saskatoon is the largest city in the province (the capital is Regina, 2.5 hours north) and is named after the berry of the same name.

Fun fact: Saskatoon berries are delicious in jams and pies, and like blueberries, contain all sorts of nutrients and anti-oxidants that are good for you. Just like a visit to Sasktoon will be.

1. Sleep in a Tipi in Wanuskewin Heritage Park

Shortlisted for UNESCO world heritage status, Wanuskewin Heritage Park sits above Opimihaw Creek and the South Saskatchewan River near Saskatoon. This wide open space is a window into a part of Canada’s history that remains largely undiscovered.

Wanuskewin contains evidence of ancient peoples, who lived, gathered and hunted bison in a similar, coordinated manner as in neighbouring Alberta. It is the location of Canada’s longest running archaeological dig site, which provides a glimpse into the area’s 6,000+ year human history. Guests can tour the park with local First Nation guides who demonstrate hunting techniques (that you can also try), and uncover the sacred plants and animals that were and remain important to indigenous people today.

If you wish to immersive yourself in the spirit and life of Wanuskewin, consider a luxury tipi sleepover. The Park’s Tipi Village can accommodate up to 4 tipis, which can sleep between 10 to 12 people from May to October. A tipi sleepover is a fantastic way to learn about the park, its people and history. You’ll also get to fry bannock over an open fire (yum), learn about traditional and sacred plants, and catch a peek of the Northern Lights if you’re lucky.

2. Pick flowers on Black Fox Farm (or try the gin)

Wander through acres of blooming gladiolas and fields of flowers at the bucolic Black Fox Farm. You can pick your own bucket of flowers for a set price, and in fall, choose your Halloween pumpkin here. This family-owned farm is also one of the few farm-to-still distilleries in North America.

John Cote and Barb Stephanysyhn-Cote are grain farmers turned distillers. They grow 90% of what is in their products, from honey to haskap berries (which are totally delicious) to pumpkin flowers. Their oaked gin won World’s Best Gin in London UK in 2016, so if you’re of age, do sample some of their delicious gin, and take some home. Your friends will thank you.

3. Visit the Farmer’s Market in Riversdale

As far as downtown Saskatoon’s tourist attractions go, Farmer’s Market in Riversdale should be a must stop during the summer months. The Farmer’s Market is a vibrant and busy place, packed with vendors selling fresh farm produce, arts, crafts, and homemade foodstuffs.

You can also find good coffee, baked treats (you can get yummy Darkside Donuts at Venn Coffee Roasters), ice cream and lunch items to enjoy while you sit outside, enjoy live music and people watch on a summer’s day. The Market is open all year round, every Saturday, Sunday and Wednesday.

This isn’t your ordinary locally-owned farm to table restaurant. From the husband and wife team that ran the much-missed The Hollows, the food at Primal is focused on local sourcing, with an emphasis on Italian inspiration. Chefs forage and purchase local fish, sustainably raised, pastured meat, poultry and eggs from small farmers. The result is rib-sticking good food like homemade pasta, pizza and roasted meats. Delicioso!

Read more about the best places to eat in Saskatoon

5. Paddle board on the River

The South Saskatchewan River meanders slowly through the heart of Saskatoon in summer. While the river is beautiful to look at from one of the eight bridges that span its banks (Saskatoon is known as the “City of Bridges,” remember?) it’s equally fun and challenging to paddle board on its surface. In fact, I’d wager that as far as outdoor activities go, this is one of the most fun things you can do in Saskatoon.

You can gain an entirely new perspective on the city by paddling on its waterways. We rented boards from the team at Escape Sports, a local-owned sporting rental and gear outfitter. The current is gentle with few waves, though if it’s windy, here’s hoping you’re with the current rather than against it. Paddle boarding can be hard work. As is one-wheeling (see below). 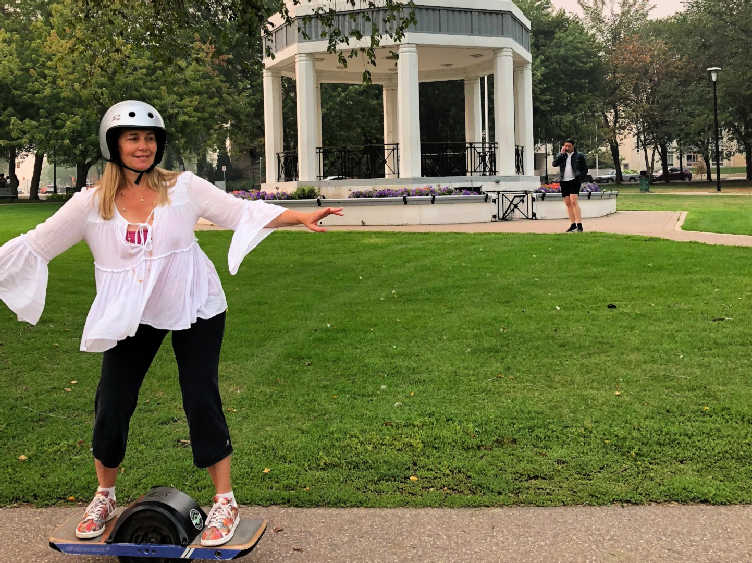 6. Get Art-Inspired at Remai Modern

As I’m married to an architect, I often hear (and read) a lot about the newest and greatest architectural goings-on in Canada and around the world. So it was truly exciting to step into the visionary Remai Modern art museum in Saskatoon. Remai Modern opened October 2017, but the hype began well before then, and having now wandered through the museum, I’d say that it’s earned the kudos. Both as a building and as an art space, it’s one of the places to visit in Saskatoon.

The museum is bright and spacious, with many galleries of varying sizes allowing for a direct and intimate experience with art. There are rotating exhibitions throughout the year, and various educator-led tours that guests can take, including a fantastic Stroller Tour where parents with wee ones are welcomed to learn about art with baby in tow.

The Remai Modern also houses the world’s largest Picasso linocut collection, as well as some of the famed artist’s ceramics. If you want to channel your own inner Picasso, you can sign up to learn the art of linocutting, which I tried and found to be challenging but really fun. There are also art workshops and camps for kids and families as well throughout the year. Stop by the museum’s Shift restaurant for coffee or lunch to enjoy a full day out at the museum.

7. Strike a pose in front of a street mural

Saskatoon has public art up the ying yang. There are vibrant and colourful street murals everywhere you look in the city. If you do a few jump shots or yoga poses in front of some artwork, no one is going to think badly of you, so have some free fun and strike a pose in front of Instagrammable walls and street murals.

8. Go to the races at Wyant Group Raceway

For car enthusiasts, one of the best things to do in Saskatoon is to channel your inner NASCAR driver at Wyant Group Raceway, Saskatoon’s oval Nascar track.

The Raceway maintains an impressive schedule of races every summer weekend, and the public is welcome to come and cheer on their favorite stock car, pro truck or bandolero cars and drivers. You can even sign up for its street car events to test your driving skills in your own car. Enjoying an outdoor track day in the summer sun is fun and affordable entertainment for car lovers of any age.

9. Go Back to the Future at Western Development Museum

Take a walk into the past at the Western Development Museum, one of the most popular places to visit in Saskatoon. This living human history museum transports visitors through 100 years of pioneer history. There’s a life-size replica of 1910 Boomtown, representing prairie life from that era.

Tractor-loving kids will love the displays of farm machinery, including steam engines, harvesting machines and tractors. There are photography displays that show prairie life as it was back in the day. There was lots of hard work but also strong communities. Why not dress up and take a photograph in a period costume to take home your own memento of prairie life?

10. Rev it up at the Saskatoon Show & Shine Weekend

Saskatoon in summer means classic car owners can shine. They uncover their beautifully restored motor babies and show them off by cruising the streets on weekends. The biggest car fest in town takes place towards late August at the ROCK 102 Show and Shine weekend.

Over 900 classic cars, trucks and motorcycles cruise the streets, basking in the appreciation of car fans. The Rock the River classic rock festival is also around this time. If you love classic rock AND cars, Saskatoon is the place to be in August.

11. Get curious at Saskatoon Nutrien Wonderhub

The Saskatoon Nutrien Wonderhub children’s museum opened in June 2019 and is already providing amazing fun for kids of any age. Located in the former Mendel Art Gallery, the Wonderhub is a child-centred, active space with 12 permanent exhibits, including larger exhibits like Toon Town and the North Woods, two of the first exhibits visitors will see when entering the building.

Toon Town is like a “miniature city that kids get to take over.” Depending on the day, the building facades in Toon Town could be a school, a bank, or even a veterinary clinic. The exhibit also has a truck that can be a food truck or an ambulance. At the theatre, kids can put on costumes and make their own productions. This is a place where the imagination can run free, as it should when you’re wee.

The North Woods exhibit takes its cue from the beauty of Saskatchewan’s wide open spaces. Guests may feel like they’re on one of the province’s beautiful lakes. It includes a Gathering Place for storytelling and learning about Saskatchewan’s First Nations heritage. Other exhibits include a hands-on machine workshop with 3-D printers for older kids. Temporary displays also involve hands-on, inventive play.

How to Plan a Windy City Weekend in Chicago

How to Spend the Weekend in Houston, Texas

Tips for an Unforgettable Lost Weekend in New Orleans

Disclosure: The writer travelled to Saskatoon as a guest of Tourism Saskatoon. As always, her opinions are honest and her own. 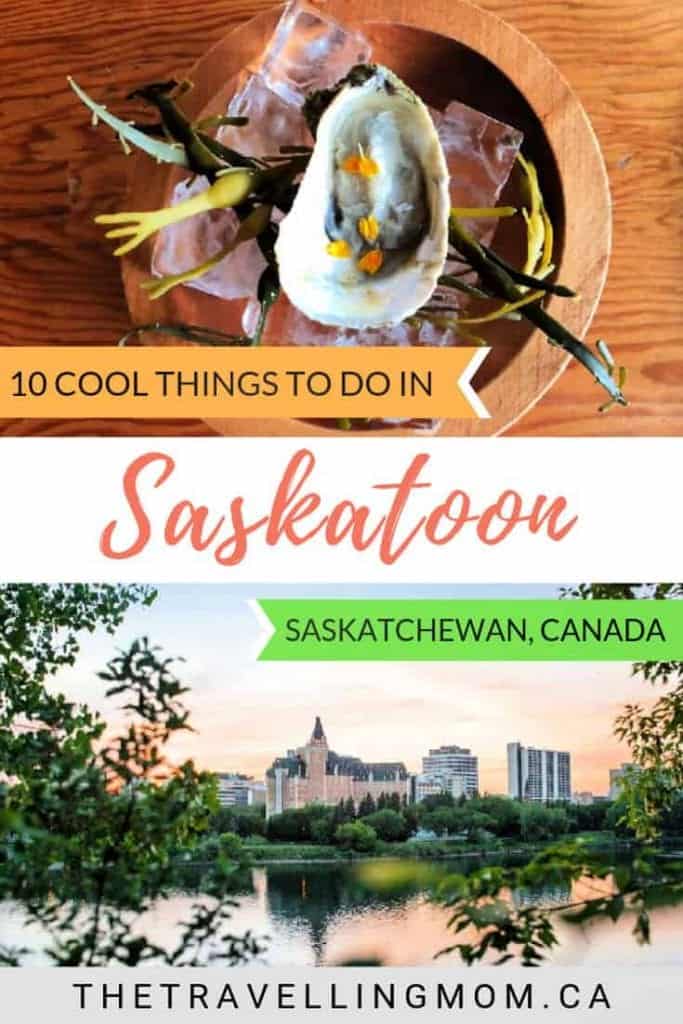