Let’s go! Playful things to do in Park City in winter

We’re never too old to play. I was reminded of this recently during my visit to Park City, Utah, where I engaged in all kinds of fun and thrilling experiences that lifted my spirits and renewed my love of winter sports. This revelation may have occurred as I careened down a snow tube hill or swished my way down the delectable dry powder runs of Park City’s Canyons Village. But the truth is, the many playful things to do in Park City in winter surprised and delighted me. And they will for anyone with a love of snow sports and desire for great food, accommodation and winter fun.

Things to do in Park City, Utah

Once a silver-mining town that was discovered in 1868 and incorporated in 1884, picturesque Park City has come a long way since then. Instead of silver, residents and ski resort operators reap the rewards of natural ‘white gold’ – nearly 30 feet of annual dry powder snow. For winter sports lovers, the largest ski area in the United States offers something for everyone. Winter activities include skiing, riding, skating, tubing, sleigh rides, and all the benefits that come with those outdoor adventures – incredible restaurants, hotels and shopping along Park City’s delightful historic Main Street.

The city is home to two large ski resorts, Park City Mountain Resort and Deer Valley Resort. These resorts offer a variety of ski runs for skiers and snowboarders of all levels, as well as rental equipment, lessons, and other amenities. Skiing and snowboarding may be the royal couple ruling the snow-covered hills, but Park City, Utah, in winter is rich in fun of all shapes and sizes.

The city is known for its large ski resorts and was the main host of the 2002 Winter Olympics. It is also home to the Sundance Film Festival.

During the winter months of November to March, Park City weather averages a daily high temperature below 35°F (1.5C). The coldest month of the year in Park City is January, with an average low of 12°F (-11C) and high of 25°F (-4C).

Park City has a free transit system, including a fleet of emissions-free buses on its most popular route. In addition, hotel shuttles offer guests free transportation while visiting, so you can easily avoid renting a car while visiting Park City.

Park City has committed to North America’s most ambitious climate and sustainability goals. The city aims to be net-zero carbon and run on 100% renewable electricity for city operations by 2022, and for the whole community by 2030.

Park City Mountain is a giant ski area. There are more than 7,300 skiable acres, 330+ trails, and an average snowfall of 355 inches – nearly 30 feet. The ski resort includes Park City Mountain Village and Canyons Village. They’re connected via the Quicksilver Gondola, creating what is now the largest ski resort in the United States. (If you’re wondering which ski resort is the largest in North America, it’s Whistler Blackcomb, in Whistler, Canada.) And like Whistler-Blackcomb, Park City Ski Resort is part of the EPIC PASS network.

I’ve had the privilege of skiing at both resorts. What strikes me most about skiing in Park City and Utah is the quality of the snow and variety of the runs for skiers of all skill levels. There really is a run (or five) for everyone, whether beginner, intermediate or expert. And the dry champagne powder is legendary, among the best I’ve ever skied.

Park City’s winter wonderland and proximity to Salt Lake City garnered it the honor of hosting many alpine events at the 2002 Winter Olympic Games. That legacy lives on at the Utah Olympic Park, site of those Games and now a training and competition venue for Olympic and aspiring Olympic athletes. This is one of most popular attractions in Park City.

Utah Olympic Park features a variety of facilities, including an Olympic-sized ice rink, ski jumps, a bobsled (nicknamed “The Comet”) and luge track, and a snowboarding and freestyle skiing halfpipe. It also has a visitor center where visitors can learn about the history of the Olympics. The Park hosts annual World Cup races and live demonstrations of various sports.

Woodward Park City is a large (66,000 sq ft) action sports and adventure facility that opened in late 2019. It features a variety of indoor and outdoor activities, including skiing, snowboarding, mountain biking, skateboarding, snow tubing and more. The facility is designed to provide a safe and fun environment for people of all ages and abilities to enjoy action sports.

During winter, Woodward Park City operates a ski hill, terrain park and snow tube park. Here, families, friends and groups can careen down the groomed lane on an inflatable tube and return to the top via moving carpet.

11 Things to do in Park City in Winter

This list could be as long as the Home Run ski run on Park City Mountain – 3.5 miles! But let’s keep it manageable, shall we?

2. Go ice skating at the outdoor rink at the Park City Mountain Ice Arena in the center of town.

3. Take a tour of the Utah Olympic Park, which was home to many of the events during the 2002 Winter Olympics.

4. Go on a dog sledding tour with Bear Ridge Adventures through the mountains surrounding Park City.

6. Enjoy a winter hike or snowshoe through the surrounding Wasatch Mountains. There are hundreds of snowshoe trails in Park City; try the East 224 Connector and McCloud Creek Trails, Rockport Lake Trail, or the Gambel Oak Loop.

7. Visit the Park City Museum on Main Street to learn about the city’s silver-mining history, the rise of its ski industry and role in the 2002 Winter Olympics.

9. Go shopping at the historic Main Street area, which has a variety of unique stores (Cake and Panache are two women-owned local shops), restaurants, galleries and public art. See our list of fave dining spots below.

10. Take a tour of the High West Distillery, which produces hand-crafted whiskey and other spirits. This is the only ski-in, ski-out distillery in North America.

11. Relax and unwind at one of Park City, Utah’s many spas – like Spa Pendry – which offer a variety of treatments and services.

Where to eat in Park City

The variety of cuisine that can be found at Park City restaurants is mind-blowing. From American favorites like burgers and pizza to modern Japanese or authentic Mexican, the dining options are plentiful and delicious. Here are a few of my favorites.

KITA – Sophisticated sushi house located inside Pendry Park City. Menu features fresh sushi made from fish flown in the night before from Japan as well as grilled meats.

Where to stay in Park City

There’s no shortage of fantastic hotel accommodation choices in this thriving mountain town. It’s full of well-known luxury brands, including St. Regis, Waldorf Astoria and Auberge Resorts Collection, as well as boutique properties like the Washington School House Hotel. I had the pleasure of staying at one of the newest and most stylish hotel properties during my visit, the Pendry Park City.

The Pendry, a spinoff from five-star Montage Hotels & Resorts, opened in February 2022, on the Canyons Village side of Park City Mountain. This is the Pendry brand’s first resort in the US Rocky Mountains.

The design-forward contemporary hotel features 152 ski-in/ski-out guest rooms and suites, some of which interconnect for large groups or multigen family stays. The Pendry Park City is comprised of three buildings, linked via a convenient and heated second-floor walkway.

The Pendry is in the centre of Canyons Village, just steps from the Red Pine Gondola, slope side dining, entertainment and mountain amenities. Great in-house restaurants include Disco Pizza, Dos Olas for classic authentic Mexican cuisine, and KITA, the sophisticated fine dining restaurant.

Japanese for “north”, KITA is a Japanese grill style restaurant set in a beautiful modern space with indoor, al fresco and sushi bar seating. The menu features fresh sushi made from fish flown in the night before from Japan, Japanese steakhouse favorites (including Kagawa Wagyu beef), grilled fish, house-made ramen bowls and a curated menu of beer, sake, wine and cocktails. The cuisine here is superlative, as is the service.

Who doesn’t love a rooftop pool? The Pendry Park City features the only rooftop pool and lounge in the city. Linger at the Pool House for mountain views and plates of burgers, local brews and cocktails.

Put your skis up – or leave them with Pendry’s Ski Valet – and enjoy après at Ski Beach. This is where California meets Utah. Take a seat by the fire and sample outdoor cocktails, small bites, and live music– all in a slopeside setting. Located steps from the hotel and Canyons Village.

Or indulge in the elevated indoor Après Pendry, a perfect place to end any day on the mountains. Fireside seating, slope side views, live music and a menu of shareable dishes (think charcuterie boards, German pretzels and fondue), all in a cosy lobby setting. This was my new favorite way to end a great ski day before getting ready for a night on the town. The Breakfast version of Après Pendry was also a delicious option to begin the day. Menu includes a fortifying crème brulee oatmeal, espresso drinks and a Sunrise Sandwich. To-go options are available.

The Pendry Park City vibe is posh and luxe, but the staff is incredibly friendly, the guests laid back and at ease, which fits in well with the stunning mountain surroundings. After all, who wouldn’t feel great being enveloped in so much natural and manmade beauty?

Disclosure: The writer was hosted by Visit Park City and Pendry Park City. As always, her opinions and love of winter sports is honest and her own. 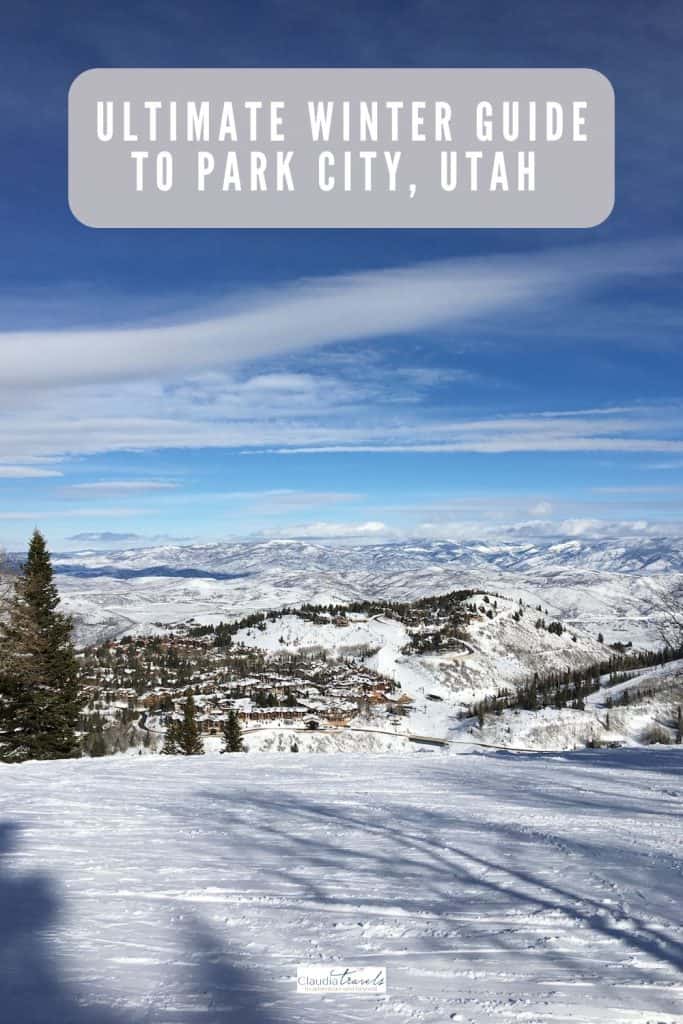