Let me guess, you’ve read the title and you’re like, woah! Las Vegas with teens in tow? Have I gone crazy? No, my friends, Sin City is legit a fantastic family travel destination, particularly if you have older kids who can do cool things and have the stamina to keep up. I’m not talking about gambling or the casinos. This list is all about the fun things to do in Las Vegas, like food tours, helicopter rides, operating big machines, riding ATVs and visiting ghost towns.

It may come as a surprise but this famous oasis in the desert serves up a lot more than a 24/7 buffet menu of casinos and slot machines. Whether you’re a Vegas virgin or veteran, you’ll find authentic, fun and thrilling off-grid experiences that will more than satisfy the pickiest teen or tween, on and off the Strip. (And don’t miss the bonus content just for moms at the end of the article!)

Things to do in Las Vegas with Teens

From playing with big diggers to watching pro sports, riding ATVs and giant wheels, visiting abandoned gold mines and noshing on food tours, a holiday in Las Vegas with teenagers is anything but boring. Trust me, we’ve been there and done that! With two teen thumbs up.

The owner of Lip Smacking Foodie Tours advises you to “come hungry,” which is never a problem since teens are always hungry, right? Donald Contoursi’s food tours of the Strip and Vegas’ downtown Fremont East district showcase the best signature dishes of the local restaurant scene. The tours last about three hours, and guides provide guests with a primer on Vegas history, along with the chance to meet like-minded foodies. All dietary restrictions can be met, and tours are prioritized with VIP seating and menus.

What could be more fun than playing with huge earth-moving machines with your family? At Dig This Vegas, you can channel your inner “Bob the Builder” in a giant natural sandbox using bulldozers, excavators and back hoes. Kids as young as 8+ years old can operate some of the machines, so your teenager won’t have any problem moving a 20-ton excavator or bulldozer around the yard.

Dig This guides explain all the levers and buttons of the control panels before letting you (kind of) loose in your climate-controlled big rig. You’re connected to instructors via headsets, in case you need extra guidance. Then it’s basically play time as you steer the machines, complete with nicknames like Maximus, around the play yard; excavating trenches, trying to stack giant tires, and managing obstacle courses.

DYK: built in 1933, the historic Hoover Dam has enough concrete to circumnavigate the earth at the Equator. Book a scenic and thrilling helicopter flight microadventure with Papillon Helicopters to really appreciate this important feat of hydroelectric engineering.

The view from the cockpit offers unique perspective on the dam’s structure and design, and the desert landscape below. As you fly above the Dam, Lake Mead, and the fascinating formations of Black Canyon, the friendly pilot will share educational information and details about the sights on the ground.

The Vegas Strip is its own free light show in this city of lights. But for a treat, visit the Viva Vision light show, part of the Fremont Street experience. This is the largest video screen in the world, boasting 16.4 million brilliant pixels. It’s 1,375 feet long, 90 feet wide and suspended 90 feet above Fremont Street’s pedestrian mall. If your teen is a gamer, the mind-blowing visuals will surely impress. Shows run from 6 PM to 2 AM every night.

Go back in time to the Old West of 1861 and explore Nevada’s rich mining history. Visit the Eldorado Canyon historic mining site just 45 minutes outside of Las Vegas. The ATV adventure and the gold mine tour (see below) combine for a great day trip from Las Vegas with teens.

Hop on a four-wheel ATV and ride through a desert canyon dotted with cholla cacti on a fun Awesome Adventures Tours. The four-wheeled ATV tour covers trails meant for mule-driven ore wagons. The guided tour takes up to 90 minutes, and a helmet, helmet sock, goggles, gloves and water are provided. Keep a sharp eye out for big horn sheep or mountain lions in the brown hills above the trails.

Visit the Techatticup Gold Mine

The abandoned Techatticup gold mine is an eerie site. And the Techatticup Mine Tour will have you wandering through its dark and twisted tunnels. The pathways are narrow and dim, with 100-year old mining debris still scattered around. This mine was a profitable source of gold in the 19th century, mined from quartz veins that you can still see on the walls.

The guided tour talks about the mine’s history, which includes learning about the harsh working conditions and short life span of miners and their donkey ore-haulers. Most men didn’t live past 35 years old, and many donkeys would go blind after ten days in the darkness of the mine.

The nearby ghost town of Techatticup Mill is worth visiting in its own right. Step into its General Store to see a quirky collection of kitsch, knick-knacks, and an odd shrine to Area 51.

The Mob Museum, The National Museum of Organized Crime and Law Enforcement

Would Vegas be Vegas without the Mob? The answer to that question can be found at the excellent Mob Museum in downtown Las Vegas.

It’s not every day that you meet a museum docent who served as a mob ‘specialist’ in a past life. While you may not hear any spilled secrets from the living here, you will get an eye and earful about Made Men, G-Men and their bosses, at the Mob Museum.

Located in the historic former Courthouse and Post Office, this interactive museum presents a fascinating view of organized crime’s impact on Las Vegas history. It also talks about the Mob’s unique imprint on America and the world. Visitors get to read and hear real stories as Mob history is revealed through live interpreters and engaging exhibits, including the infamous St. Valentine’s Day Massacre.

The Museum is also home to The Underground, a permanent exhibition, distillery and speakeasy that is dedicated to the history of Prohibition. Teens can’t enter the speakeasy section (even with the password), but everyone can time travel back to the 1920s, when Prohibition gave rise to the Mob’s control over the outlawed liquor trade.

Your teen can’t be a high roller at the tables, but she can be in the sky. The High Roller Observation Wheel is the largest and one of the tallest observation wheels in the world. It soars 550 feet above the center of the Las Vegas Strip. With sweeping 360-degree views, the wheel thrill ride takes 30 minutes to complete one revolution and features 28 spacious cabins. It’s located at The Linq Hotel.

What isn’t performing in Las Vegas these days? There are so many live shows to choose from when visiting Las Vegas with teens, you might have to extend your stay. There’s live comedy, magic shows and musicals. Acrobatic Cirque du Soleil performances and tribute shows. Musical concerts by all the big names, and Las Vegas Residences – engagements by artists like Sting, Rod Stewart and Aerosmith – who stay over an extended period of time.

My advice is to discuss what your teen would like to see ahead of time. Then book and enjoy a few live shows that will hopefully please everyone as much as possible. When we visited Las Vegas with teens, our son picked the MJ Live (a Michael Jackson tribute) at the Tropicana. It was a phenomenal show.

Enjoy the bright lights of The Neon Museum

Founded in 1996, The Neon Museum is home to Las Vegas’ iconic neon signs that have seen better days. Its campus features an outdoor exhibition space known as the Neon Boneyard, which houses rescued signs from the storied history of Sin City.

Many of the restored signs are on all the time. The Main Boneyard contains more than 200 unrestored signs which are illuminated at sunset with ground lighting, so plan a visit at dusk to feel the full magic of those bright neon lights.

Speaking of signs, the Fabulous Las Vegas Sign is free and accessible 24 hours a day. It’s located about six minutes drive south of Mandalay Bay Hotel, at the southern end of the Strip,

If you’re visiting Las Vegas with teens who are big into sports, good news. The city has such a big choice of major pro sports teams, there’s nearly always a home game in town. Teams include the Vegas Raiders of the NFL, (the team relocated from Oakland, California); the puck-wielding Vegas Golden Knights (NHL), one of newest franchises in the League; Las Vegas Lights FC (MLS) soccer team, and the Las Vegas Aces (WNBA) women’s basketball team.

The Knights play in the beautiful T-Mobile Arena, which is on the Vegas strip. Allegiant Stadium is the 1.8 million-square-foot home of the NFL’s Las Vegas Raiders and the University of Nevada, Las Vegas (UNLV) college football team.

Looking for a taste of that other famous city of lights? Head 46 stories up for a tour of the half-scale replica of the Eiffel Tower. You will be treated to some amazing views, and a chance to take in the city away from the crowded streets and sidewalks.

Ladies, this one’s for you! Magic Mike Live is not a family-friendly show but I HAVE to include it for the moms because I loved it and you might too. Life imitates cinematic art at this live experience based on the hit films Magic Mike and Magic Mike XXL.

The live show recreates the fictional Club Domina as a cabaret nightclub inside the SAHARA Las Vegas Hotel. The intimate space gives guests front-row seats to the show which features thirteen very handsome and talented men performing in front of, above and behind the audience. This is an interactive show, where hopeful and willing participants are given ‘cash’ to throw and whoop it up. Random guests may also be chosen from the crowd of mostly, but not exclusively, female attendees. Enjoy, ladies! 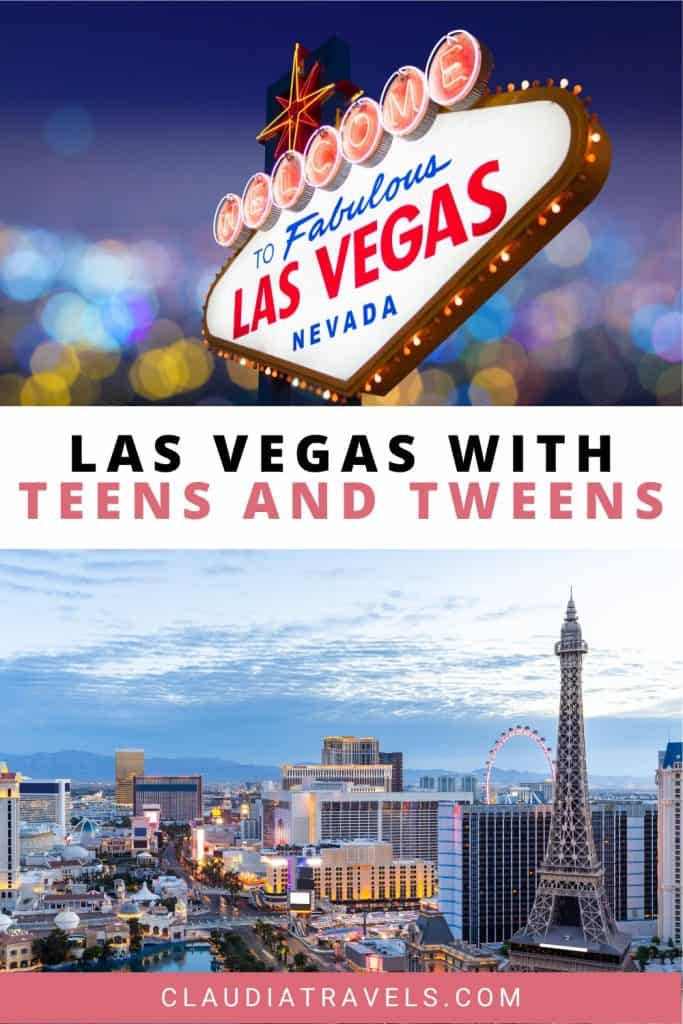