Exploring the BC coast at Outer Shores Lodge

The tide is at its lowest point of the day outside of Outer Shores Lodge in Bamfield, British Columbia. The ocean’s slow retreat reveals a landscape of rocks encrusted with barnacles and draped in long strands of kelp; tidal pools teem with sea snails, urchins, star fish and blue crabs.

We step carefully among the marine paraphernalia, keeping our eyes on the shifting carpet of sand, careful not to crush living things underfoot. The ocean’s roar is a constant, muted sound, occasionally broken by the call of a pair of nesting eagles and small fishing boats chugging out to sea.

Our guide, Outer Shores Lodge co-owner (along with Scott Wallace) Russell Markel, who happens to be a marine biologist, holds up a long white thread kelp, explaining that while ‘all kelp is a seaweed, not all seaweed is a kelp.’

For those eager to nurture their inner citizen scientist, venturing out with Markel is part of an average day in the ‘great outdoor office’ of Outer Shores Lodge. The opportunity to explore and gain an understanding about the marine web of life that lies just steps from the Lodge’s waterfront deck appeals to the type of guest and traveler that Markel has come to welcome in his decade of operating Outer Shores Expeditions.

Markel began his coastal explorations from the company’s classic wooden schooner, Passing Cloud. And now, with the opening of Outer Shores Lodge in spring 2022, Markel gives guests the chance to experience that same all-inclusive immersive adventure experience on land, in Bamfield on Barkley Sound in Vancouver Island.

Roll on, thou deep and dark blue Ocean – roll!

Man marks the earth with ruin – his control

Stops with the shore.

As a marine scientist, Markel is not a philosopher by nature. However, he was inspired by ecologists and marine biologists of the 20th century, including American Ed Ricketts.

Ricketts, a self-taught marine biologist and eccentric personage who inspired novelist John Steinbeck’s “Doc” character in the 20th century classic Cannery Row, understood the ‘invisible web’ that exists in the ocean, and on land.

While Byron’s poem implies that man’s control stops with the shore, both Ricketts and Markel know that man can ruin the sea as much as he’s ruined the land. Man’s control has extended into the far reaches of the deep blue ocean, into the depths and shoals of our coastline’s outer shores to seek out – and plunder – its riches.

Ricketts’ holistic and ecological approach to marine science in the early 1900s was very similar to the beliefs and regard for the earth and its creatures that is manifested by First Nations.  While his time exploring the outer shores of California, British Columbia and Alaska was cut short, Ricketts’ influence lives on. Both the name of Markel’s company and Lodge honor that influence, as expressed in Ricketts work, Between the Tides.

Markel comes from academia, having pursued a PhD in marine sciences and studied at the renowned Bamfield Marine Sciences Centre. His love of marine biology and the environment led to Markel’s desire to move beyond the walls of the lab and classroom and out into the field and the world of marine coastal tourism.

His background has served him well, inviting guests from around the world to sail – and now stay – on British Columbia’s west coast, providing immersive adventure, cultural and citizen scientist programming that entertains and educates.

As Markel describes it, he strives to ‘mix leisurely journeys with science,’ introducing curious and adventurous travelers who are keen on authentic experiences to see and enjoy the outer shores of BC’s west coast, up close and in person.

Outer Shores Lodge is located on a rocky outcrop in the remote historic fishing community of Bamfield, on the traditional territory of the Huu-ay-aht First Nation, on Barkley Sound on Vancouver Island. The Lodge opened in spring 2022, and operates in spring, summer and fall. It offers stays of 3, 4 and 7 nights in duration.

The site also features two private cabins; a single-story cabin with one-bedroom and a two-story cabin with two-bedrooms and loft. Each cabin is fully self-contained and situated on the adjacent bluff that offers wonderful panoramic views of Barkley Sound, including stunning west coast sunsets.

Other on-site amenities currently include a beach-side fire pit, indoor steam shower, plus an abundance of private forests, gardens, and shorelines to find peace, solitude, and space for relaxation and contemplation.

Outer Shores Lodge is an easy walk to a protected harbour in Bamfield, as well as the village’s quaint historic boardwalk, and several beaches. Canada’s most renowned marine biological research institution, the Bamfield Marine Sciences Centre, is situated directly across the harbour. Tours can be arranged.

A stay at Outer Shores Lodge is all-inclusive and includes gourmet locally sourced meals created by a professional chef and pastry chef. The food is exquisite, as delicious as it is beautifully presented. The Lodge knows how to feed and pamper its guests! Food allergies and preferences can be accommodated with advanced notice.

Didn’t pack your wellies? No problem. Outdoor gear, gumboots and appropriate rain wear are available and provided as needed.

There is an incredible variety of things to do at Outer Shores Lodge. Programming is extensive and inclusive experiences that feature the coastal outdoors, like daily interpretive walks and hikes with expert guides in old-growth rainforests, bogs, estuaries, sandy beaches, and rocky intertidal habitats.

The Lodge has partnered with the Huu-ay-aht First Nations on guided cultural site visits of the ancient Huu-ay-aht village and fortress site of Kiix?in.

Reaching this National Historic Site involves a guided hike through an impressive temperate rainforest to a sheltered beach and bay. Guests then enjoy a guided cultural tour of the Kiix?in village site, the only known traditional First Nations village remaining on the west coast of southern British Columbia.

For those interested in venturing beyond the Lodge’s land base, Markel plans to dock the Passing Cloud in Bamfield in summer 2023. He will offer daily sailing excursions for Lodge guests to explore the wildlife of Barkley Sound, including the Deer and Broken Islands, from the comfort of a 70-foot sailing vessel.

Launched in Victoria, BC, in 1974 and renowned for her elegant design, exceptional accommodation, robust construction, and remarkable sailing abilities, Passing Cloud has a rich history on the BC coast.

It is a fantastic vessel for intimate wildlife and cultural expeditions along the coast of Haida Gwaii and the Great Bear Rainforest. Among many appealing features are her three private staterooms, beautiful main salon, traditional wheelhouse, generous deck space, and exceptional sailing abilities.

How to get to Outer Shores Lodge

Bamfield is located on a remote part of western Vancouver Island. It’s on the edge of Pacific Rim National Park Reserve, including the Broken Islands group.

The Lodge can be reached by float plane from Vancouver, by boat from Tofino, or by a 4-hour passenger ferry from Port Alberni via the MS Frances Barkley. There is also a very challenging 3-hour drive from Port Alberni. However, the road trip is only recommended if you have 4-wheel drive vehicle, as the road is unpaved and rutted with potholes.

In fall 2023, change is coming to the community. The Alberni-Bamfield road will be paved, making the trip easier and faster for residents and visitors. This will open up the village and area to greater tourism presence, while also creating potentially more development pressure on this quiet and bucolic coastal community.

Best Things to do in Parksville BC

The Best BC Campgrounds in British Columbia

Things to do in Tofino with Kids

Disclosure: The writer was a guest of Outer Shores Lodge and Tourism Vancouver Island. As always, her opinions and love of the west coast is honest and her own. 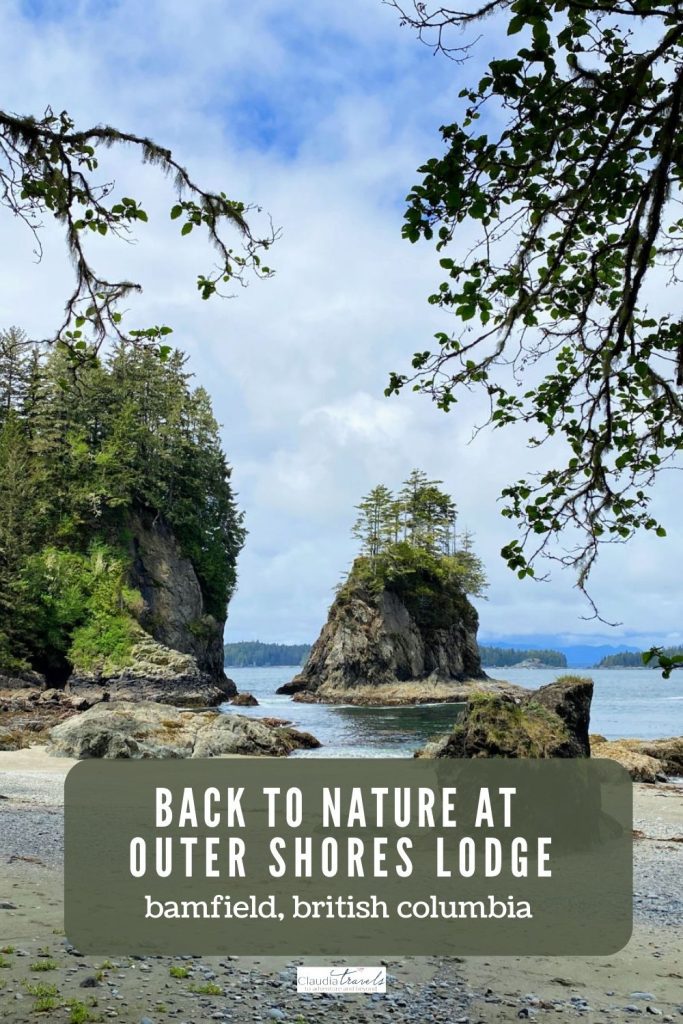