The Best Cappuccino and Gelato in Rome

I’ve often wondered how Italians became ‘the’ global coffee cognoscenti. After all, coffee beans don’t grow in Italy. They’re imported from the tropics, then roasted, ground, and consumed in Italy in vast quantities. Similarly, the Italian love of gelato is understandable, yet how did it become a worldwide phenomenon as well?

It’s the ritual of coffee in Italy that has risen above all others. Espresso, cappuccino, americano and caffe latte are Italian coffee drinks that have been embraced worldwide as favorite coffee rites. They may be foreign words, but they’re lovingly repeated a million times across North America every day. Italian coffee culture is second to none. As a traveler, you can master its secrets with our guide to the best cappuccino and best gelato in Rome. We’ve done the taste-testing for you, and believe me, the pleasure was ours!

Where to Find the Best Cappuccino and Gelato in Rome

For a coffee loving traveller, Italy is nirvana. It’s the promised land. You can go into any local Bar and have a very good espresso nearly anywhere in the country. But these two choices are our two favorites for those visiting the eternal city.

Caffe Sant’Eustachio – Fabulously located near the Pantheon and Piazza Navona, this historic Roman café dates back to the 1930s. It’s crowded at all times by locals and travelling coffee enthusiasts. The Grancaffe is a very special espresso and milk coffee. The barista prepares it behind the counter, hidden by a metal shield. This is so no one can view the creative ‘magic’. Pay first, then crowd the bar to exchange your ticket for 2 minutes of coffee drinking heaven.

La Tazza d’Oro – Also near the Pantheon, this café offers speedy delivery of excellent espresso and cappuccino at very reasonable prices. Considering its prime location in Rome, this is a pleasant surprise. The café is bigger and not quite as crowded as Sant’Eustachio. Which is great when you really need that espresso shot around 3 PM.

Need to run off that gelato? Check out our top ten list of the best things to do in Rome with kids.

Giolitti – One hundred and ten years of gelato means they are doing something very right. This old-world gelateria is near the Italian Parliament and the Pantheon. There’s also a location in the Roman neighbourhood of Testaccio.

The Gelateria beautifully decorated with spacious indoor seating and outdoor tables. There are a tempting number of metal tubs of home-made gelato to choose from. You may have to go more than once to do justice to their impressive selection.

San Crispino – A small, artisanal (‘artigianale’) gelateria near the Trevi Fountain. We found it by very fortunate accident and enjoyed the best gelati of our entire trip. The house specialty is a gelato with honey and Marsala wine. But we were tempted by their other offerings of Nocciola and Limone. Delicioso!

Five Helpful Tips for Visiting the Vatican Museums in Rome

Fatamorgana – This artisanal gelateria has three locations in Rome. Near the Colosseum, one near the Vatican, and one in Trastevere. Owner Maria Agnese Spagnuolo, who is originally from Puglia, is fondly referred to as the ‘gelato fairy’. All of her gelato is 100% natural and uses fresh, local ingredients.

Gelateria del Teatro (one near Piazza Navona and near Campo de’ Fiori) – Serving up an annual rotation of 200 recipes of artisanal gelato. An emphasis on quality and freshness. This gelateria uses local and seasonal ingredients (think Amalfi lemons!), including olive oils for their cones.

Gelateria della Palma – Huge selection of gelato in this somewhat kitschy and colourful gelateria (also near the Pantheon). Della Palma is a very kid-friendly spot, with tasty gelati and other sugary treats and candies (if you need more for the road).

When we visit Rome, part of our vacation promise to the children is for a ‘daily holiday gelato’. This is a wise strategy to motivate tired legs and revitalize everybody with a delicious, pick-me-up treat, usually enjoyed in the afternoons. I still swear by ‘a gelato a day keeps the tantrums away’ on any family vacation we enjoy.

How to Order Gelato

Ordering gelato is an orderly, defined process in Italy. Here’s the Six Step Process you need to follow.

Which do you prefer – espresso or gelato? Or both? Share your comments below. 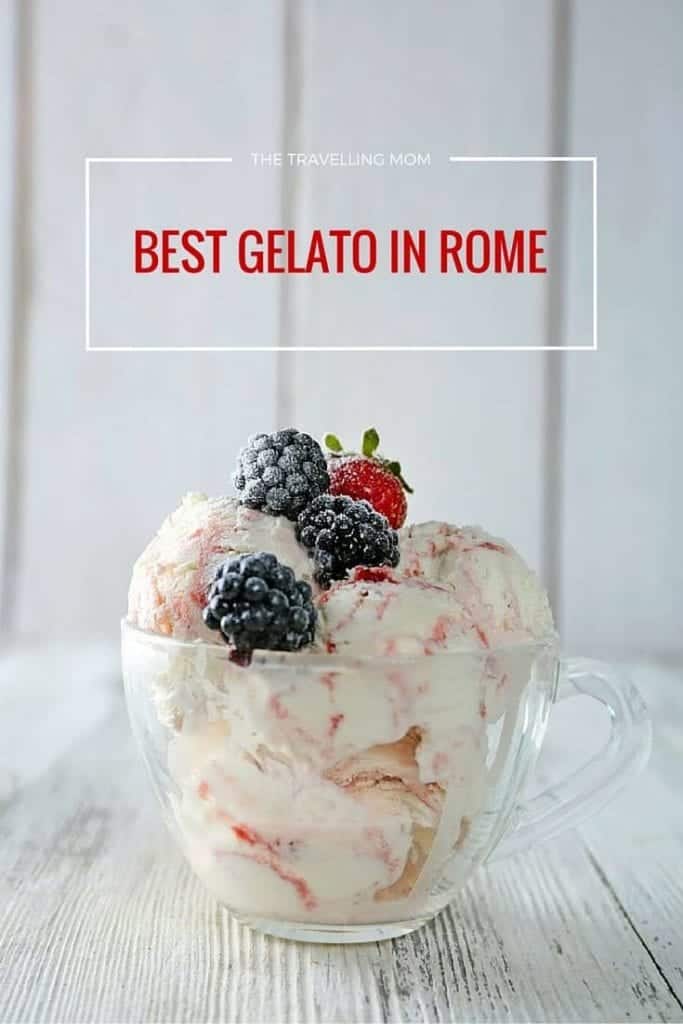