Tips for an Authentic Bedouin Experience in Jordan

I have more incredible memories than I can count from my journey to the Middle East. One of the most special was the opportunity to enjoy an authentic Bedouin experience in Jordan at the Feynan Ecolodge in the Dana Biosphere Reserve.

The Dana Reserve, approximately 2.5-hours south of the bustling capital of Amman, is the largest natural reserve in Jordan. It includes over 300 km of land with four different bio-geographical zones and over 800 species of flora and fauna. You can stay and access Dana from the world-renowned, off-grid Feynan EcoLodge, which is an amazing experience in itself.

The Bedouin have traditionally been a tribal, desert-dwelling people, connected by their tribes, clans and customs. The majority of Jordan’s population is of Bedouin origin, and while most have left their nomadic lifestyles and become urbanised, a small minority remain nomadic and move seasonally while tending to their livestock of sheep and goats.

The Bedouin Experience in Jordan at Feynan Ecolodge

The Feynan Ecolodge employs quite a few local Bedouin as guides and interpreters for the area. This helps sustain the local economy, and showcases Bedouin traditions with visitors from all over the world.

We began our day with the Bedouin with a sunrise hike to the local mountains overlooking the Ecolodge, led by our energetic, impish 25-year old Bedouin guide Suleiman.

It was a mid-level strenuous hike, not too steep or fast, but with many loose rocks that made me grateful for my proper hiking shoes. The desert here has a unique beauty that is quite different from Wadi Rum, with more mountains and valleys than its more famous desert cousin to the south. The view as the sun rose to hit the mountain peaks of the Wadi were stunning and made the early wake-up time worthwhile.

While we hiked, Suleiman identified traditional medicinal plants, animal habitats, and the history of the site. During Roman times, the Dana area had been mined for copper, and countless slaves had worked and died in the region. You can still see the glistening copper in the rock as you hike in the hills. For all of the quiet and solitude of Dana today, learning of its past was a reminder that this part of the world has been inhabited and traversed for many centuries.

After a delicious breakfast of Jordanian food, including labneh (thickened yoghurt), hummus, dates, honey and shrak (bread) at Feynan Ecolodge, we walked over to Suleiman’s family encampment. It consisted of a large, black and white goat-hair tent structure, with an adjacent open-air tent covered in rugs and carpets for dining and meetings with visitors and clan members.

One of the strongest characteristics of Bedouin culture is hospitality. This is a vestige of harsh desert life, and as such, no traveller is turned away when he appears at a tent or home. A traditional three days of open hospitality is offered, no questions asked, and on the third day, the host will inquire why the guest is visiting.

In our case, Suleiman’s father welcomed us into his home, and invited our group to remove our shoes and sit in the open-air tent as he prepared coffee, Bedouin-style. Our first etiquette lesson was in the importance of sitting cross-legged, and not having feet outstretched or pointed at anyone across the tent. This is considered seriously impolite.

The preparation for strong Bedouin coffee begins with beans being roasted over an open flame, then ground, and the coffee boiled over that same fire. The roasted coffee is ground in the copper mibash (mortar), and whole cardamom pods are pounded and added to the coffee water for a unique and delicate flavor. We all took turns pounding the beans and pods – it was tough work.

As in the Japanese tea ceremony, ritual is critical. After boiling the coffee, Suleiman’s father tasted the coffee to ensure it was strong enough, and Suleiman proceeded to serve older people first, as a sign of respect.

The boiling hot coffee is served to seated guests in tiny cups, held in the right hand. Each person receives a maximum of 3 cups, and you shake your cup to indicate that you’re done, and then place it back on the carpet.

Talk, negotiations, and community problem-solving can begin after guests have enjoyed their coffee shots. If for some reason a guest doesn’t drink the coffee, it’s a sign that there is no agreement to the discussions.

Our Bedouin education continued post-coffee ritual, with Suleiman’s mother demonstrating the traditional preparation of arbood, bread baked in ash. You’d think that the simple combination of flour, water and salt wouldn’t become anything special to write home about, and you’d be much mistaken.

The bread was incredible. Chewy, salty and warm from the ash (which comes right off the baked loaf), we enjoyed it with a typical stew of tomatoes and potatoes, along with endless cups of sweet Jordanian mint tea. This is ‘desert to carpet’ foodie heaven, Bedouin-style.

I didn’t pack any make-up for the desert, but we did get a beauty lesson at a neighboring tent on the art of making kohl. Kohl had a very important use in the desert, as both men and women would apply it around the eyes for sun and sand protection.

Kohl is made from the soot collected in bowls placed over burning oil lamps. The soot is mixed with a little oil, and then applied to the eye area with a stick. It takes quite a while to collect enough soot to make kohl, and the application process is a bit rough, but just like with modern eyeliner, a little goes a long way.

While a Bedouin tent might look poor and ramshackle to our eyes, judging a traditional, nomadic lifestyle by urban standards doesn’t seem relevant or worthwhile. The people we met were warm, generous, and rich in culture, interrupting coffee service to take calls on modern mobile phones. The Bedouin embrace today’s world while showing respect for their traditional lifestyle.

If you’re planning a trip to Jordan, be sure to include a visit to Feynan and the Dana Biosphere to enjoy the uniqueness and beauty of a Bedouin experience for yourself.

The writer visited the Feynan Ecolodge and Dana Biosphere Reserve in Jordan as a guest of the Jordanian Tourism Board. All opinions and views are her own.

Have you ever met a Bedouin? What were your impressions? Share your comments below. 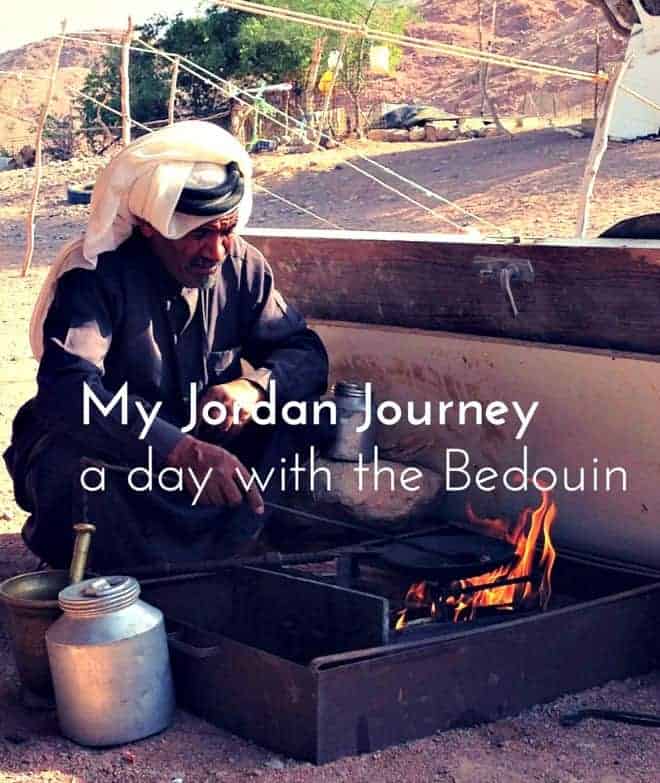