The human, geological and cultural history of Scotland is fascinating. I explored it firsthand during my recent trip to the Orkney Islands, north of the Scottish mainland. There’s no better way to visit the country than by embarking on an exploration of the Scotland UNESCO trail. This unique trail was the first of its kind in the world, and brings together the 13 UNESCO sites in Scotland to highlight the cultural and natural heritage of this beautiful country. The Scottish UNESCO sites include two Biosphere Reserves, three Creative Cities, two Global Geoparks and six World Heritage Sites.

By encouraging those visiting Scotland to linger a little longer and spend more with local businesses, the trail’s architects hope to improve the quality of life in local communities. To help you plan your Scotland trip, we’re sharing 13 outstanding sites on the Scotland UNESCO trail.

The forests, moors and woodlands of Scotland’s first UNESCO biosphere have a wild natural beauty and a rich diversity of wildlife and plants. This area’s unspoilt coastline offers breathtaking views from tall cliffs and peaceful walks down long sandy beaches. The biosphere is also home to a Gold-Tier International Dark Sky Park, making it perfect for a stargazing holiday.

Lying in the North-West Highlands of Scotland, the captivating scenery and eco-diversity of Wester Ross makes it a perfect place to slow down and feel a connection with the environment around you. Learn about the biosphere’s historic pinewoods, shimmering lochs and peaceful glens, and explore how the low-intensity crofting culture has lived in harmony with the area’s natural environment for centuries.

Read more: How to travel around the UK like a local

Once world-renowned for shipbuilding and the textile industry, Dundee has reinvented itself as a thoroughly modern city with a heavy focus on design. Dundee is home to a thriving creative sector which is celebrated in the city’s striking V&A Museum. Anyone looking for an alternative Scottish city break destination should certainly visit Dundee, with its regenerated waterfront, independent shops and great food and drink scene.

Click here to learn more about Dundee, City of Design

Writers including Sir Walter Scott, Robert Burns and Muriel Spark have all been inspired by Scotland’s capital city, which became the world’s first UNESCO City of Literature in 2004. It is also home to the world’s largest book festival, the Writers’ Museum, the world’s only purpose-built Poetry Library and a multitude of bookshops. Basically, it’s a book-lover’s dream city break!

Click here to learn more about Edinburgh, City of Literature

The city of Glasgow’s vibrant music scene is legendary, and it’s also regularly voted one of the world’s friendliest cities. If you love live music, Glasgow has something for every musical taste from a world-class orchestra playing at the Royal Concert Hall, to a rock concert at the OVO Hydro arena or a traditional ceilidh band in a local pub. Other musical experiences to savour include music tours of Glasgow and a host of independent record stores.

Click here to learn more about Glasgow, City of Music

This UNESCO geopark covers over 2000 square kilometres in the North West of Scotland and is the home of the earliest signs of life in Europe. It’s a fascinating and beautiful example of complex rock geologies featuring rock caves, peatland, forests and white sandy beaches, and of course all of the associated wildlife as well. You’ll also find evidence of wildlife from the distant past hidden in the geopark’s caves.

Visiting Shetland means you can stand on an ancient ocean floor, walk across sandy beaches and explore an extinct volcano, all in the space of one day. How amazing is that? The Shetland islands’ fascinating geology has influenced how humans live and work there, and created a home for uniquely diverse plant and animal life. Shetland geopark aims to conserve the important geological, natural and cultural heritage of the islands.

The instantly recognisable red steel Forth Bridge is one of five UNESCO World Heritage sites in Scotland. The bridge opened in 1890 and was designated a UNESCO World Heritage site in 2015 for its innovative engineering. It was the first major structure constructed from mild steel and around 200 trains still cross the bridge daily. Nearby viewpoints give wonderful views of the three bridges stretching over the Firth of Forth between Fife and Edinburgh, a real-life illustration of the evolution of engineering.

Click here to learn more about the Forth Bridge

Frontiers of the Roman Empire: The Antonine Wall

The Antonine Wall once protected the northern frontier of the Roman Empire. Emperor Antoninus Pius ordered the wall to be built around 142 AD. The 60km route stretches from coast to coast, passing through farmland and countryside and into towns and cities. It is now part of the Frontiers of the Roman Empire World Heritage Site, along with the Upper German Raetian Limes and the better-known Hadrian’s Wall.

Click here to learn more about the Antonine Wall

The inhabitants of Orkney began building large ceremonial monuments around 5,000 years ago at a significant stage in human development. The Orkney World Heritage Site now provides a valuable insight into prehistoric life on the island. The group of four key sites on mainland Orkney includes; Maeshowe chambered cairn, the Stones of Stenness, the Ring of Brodgar, and the settlement at Skara Brae. At each site, you can take guided tours or wander and wonder about the meaning behind these impressive historical sites.

Click here to learn more about the Heart of Neolithic Orkney

This mill village was in operation between 1786 and 1968 and was once considered to be the world’s largest industrial facility. New Lanark became famous for its progressive workplace, social and educational reforms. These included shorter working hours, free medical care for workers and the end of child labour for under-10s. Following its restoration, the mill now hosts a series of exhibitions and attractions that tell its story.

These islands are renowned for their dramatic beauty and remote location, which led to the development of a unique culture with close links to its environment. The final inhabitants left the island of St Kilda in 1930. Visitors can still observe the amazing biodiversity, windswept landscapes and possibly even the St Kilda puffins. If you visit St Kilda, it’s important to travel responsibly, tread lightly and be mindful of the site’s importance. 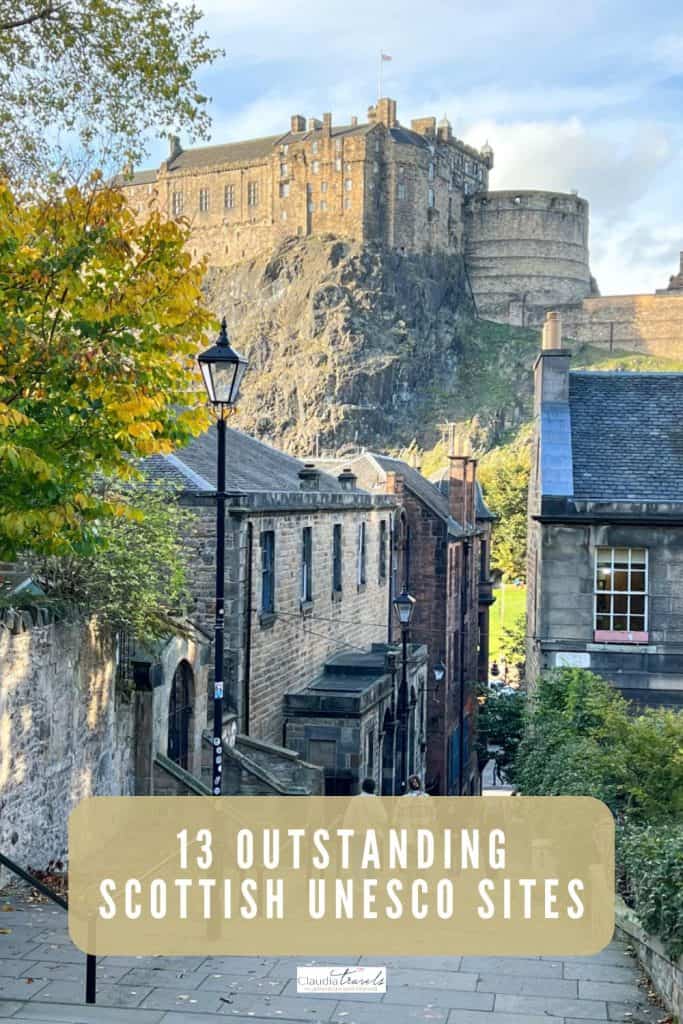