Surrounded by Raptors at the World Eagle Capital

Floating down the Cheakamus River in our yellow Sunwolf lodge raft, I quickly run out of digits to count the white-headed mature eagles and their brown juvenile friends overhead. We are surrounded by raptors on our Eagle Float Tour in Brackendale, self-styled World Eagle Capital, just north of Squamish, British Columbia.

Brackendale earned bragging rights as the site of the largest concentration of bald eagles in the world back in 1994. The annual eagle count that year numbered an incredible 3,769 raptors counted in a single day. Between December and February, thousands of eagles converge on Brackendale in an annual ritual to feast on spawning salmon.

While the most recent eagle count has been lower than in the heyday of the mid-90s, the sight of hundreds of perched raptors in front of the snowy Tantalus Mountains is an outing worth bundling up the family for.

When embarking on an outdoor rafting tour in the winter months, one dresses as one would for skiing – warm clothes, coats and boots. The lovely folks at Sunwolf offer lifejackets and some additional wet-weather gear like raincoats and hip-waders to protect against the rain. The hip-waders also work wonderfully to keep the cold of the inflatable raft from migrating into your backside as you perch on the raft edge to get a better view of the birds along the shore.

After a quick safety lesson in rafting dos and don’ts, we not-so-gracefully fall into the raft and assume our viewing (and photography) vantage points. As we float gently past bare trees dotted with eagles sunning themselves on branches, our guide and Sunwolf owner Jake Freese talks about the life cycle of the bald eagle and the salmon they depend upon. How the winter migration patterns of the eagles are intertwined with the spawning salmon run that is so critical to the local eco-system. We can see evidence of recent activity hanging askew along the river shore where eagles have feasted, decorating the riverbank with silvery salmon remains. The crows lay in wait for their turn at the leftovers, though they stay well clear of their bigger cousins.

There are so many eagles to spot and attempt to photograph, I nearly get whiplash from straining to view them all. Seeing so many magnificent raptors in such abundant numbers, sitting in the winter sunshine, it’s hard to imagine that they were so close to extinction not that long ago.

We see more than 200 eagles on our one-hour float tour down the Cheakamus River. The area is full of other bird life too, such as hawks, herons and mergansers. The Eagle Viewing Float is a wonderful and educational trip for the whole family. It has attracted people far and wide, interested in wildlife viewing, bird watching, and photography.

Owners Jake Freese and wife Jess are professional raft guides. They became full-time resort operators when they opened Sunwolf a few years back. The rustic, family-run resort sits on 5-acres of treed, riverside property north of Squamish. The cottages enjoy gorgeous views of the beautiful Tantalus Mountain range. A popular draw for Sea to Sky travellers is local secret Fergie’s Cafe, open year round and serving seriously fabulous breakfast and lunch. (Eagle Float Tour goers will get a taste of the Cafe’s baked goodies and warming stew as part of the tour package.)

Sunwolf has several cabins to choose from for a cosy couples or family getaway. The beautifully renovated Fisherman’s Cottage is perfect for large or sharing families, as it sleeps eight in well-appointed comfort.  The Logger’s Shack is anything but shack-like. While it can sleep four, I’d think I’d prefer it more for a couple’s romantic getaway. (hint hint)

In addition to offering Eagle Viewing Float Tours in the winter months, Sunwolf runs guided whitewater rafting tours in summer on the Elaho and Cheakamus River. There is also year-round fresh water fishing in these rivers. Sunwolf offers daily transportation to and from Whistler and Vancouver, making for an easy and seamless eagle tour adventure. For times and tour costs, visit here. 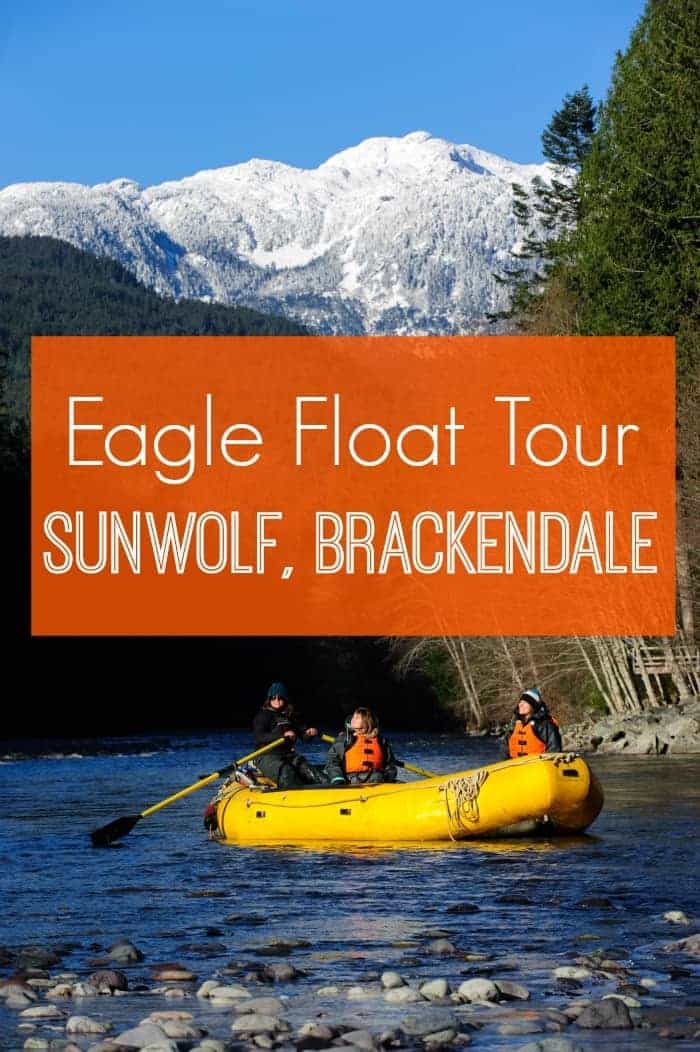 Disclosure: The Travelling Mom thanks Sunwolf for hosting her visit and Eagle Float Tour. As always, her opinions are honest and her own.

Have you enjoyed a raptor or bird-watching adventure tour? Share your experiences in the comments below.