8 of the Most Spectacular Drives in BC

Canada’s westernmost province of British Columbia is big. Like, really big. Bigger than California. Bigger than New Zealand. Four times larger than the UK and Ireland.

There’s a lot of room to move in BC, and even more to see and do for the intrepid traveler keen on great road trips in British Columbia. The provincial highway system is vast and well-maintained, perfect for planning journeys on two or four wheels. Whether you’ve got a day, a week or a month, we’re highlighting 8 of the best drives in BC.

8 Spectacular Drives in BC

One of the best drives in the world, the Sea to Sky Highway 99 shows off coastal British Columbia at its absolute finest. This beautiful roadway between Vancouver and Whistler winds its way below cliffs of coast mountains past Horseshoe Bay and along the deep blue Howe Sound fjord, past waterfalls, provincial parks, rivers, mountains, towns and attractions.

Stop for a visit and pan for gold at the Britannia Beach Mine Museum, admire the spray of Shannon Falls, then take a ride up the Sea to Sky Gondola north of Squamish for an interpretive hike with a First Nations guide. The views of Howe Sound, the Stawamus Chief, and Sky Pilot mountain from the Sea to Sky’s suspension bridge and viewing deck are unforgettable.

Whistler’s small-town mountain vibe offer something for everyone in every season, whether it’s epic skiing and riding in winter, or hiking, mountain biking or swimming in Lost Lake in summertime. Plus there’s no shortage of fine or casual dining for romantic dinners or family feasts whether it’s in the Village or in Creekside.

Note: You can do the Sea to Sky Highway drive return-trip in one day.

Continue your road trip past Whistler to Pemberton and north along the incredibly scenic Duffey Lake Road. Driving from Pemberton to Lillooet on the Duffey Lake Road is well worth the journey. This winding open road is part of the Discovery Coast Circle Route, and climbs through narrow canyons overlooking rivers, past mountains, lakes and waterfalls.

Popular attractions include Nairn Falls and Joffre Lakes Provincial Parks, the latter having some of the busiest hiking trails and park areas in the province during summer. The road includes a few pullouts for wildlife viewing and photography but note that they’re too small to accommodate large vehicles like RVs.

Vancouver Island’s Pacific Marine Circle Route is one of the most spectacular road trips in BC. It combines the best of urban city life with the wild beauty of the Island’s southwest coast, and the rolling hills and lakes of the picturesque Cowichan Valley.

While this driving route can be done in a day, we recommend an overnight stay in one of the beachfront cottages at Wild Renfrew. Explore the tide pools and sea life at Botanical Beach in Juan de Fuca Provincial Park before veering off-road to explore Big Lonely Doug and fellow giant fir and cypress trees in the emerald rainforest of Upper Avatar Grove.

The drive inland reveals rolling hills on route to Cowichan Lake, and attractions that include the BC Forest Discovery Centre, a self-guided First Nations Totem Tour Walk, and the vibrant and walkable downtown of Duncan.

Stop at the seaside village of Cowichan Bay to enjoy its small-town charms, including farm markets, the Wild Coast Perfumery, ice cream shops, many arts and crafts galleries and wine tasting at Blue Grouse Winery.

The return home to Victoria can include a ferry diversion to Brentwood Bay from Milly Bay, and a chance to stop and smell the roses, tulips and scores of other flowers and plants at renowned (and dog-friendly) Butchart Gardens.

The Sunshine Coast is less than 30 km (18 miles) from downtown Vancouver but the ferry ride to get there from the Lower Mainland sets the stage for what will be a leisurely tour of this local coastal landscape.

The entire drive to the end point of Highway 101 at Lund can be done in a day and involves two ferries, the first from Vancouver and second up the coast at Earls Cove. However, the pace of life on the Sunshine Coast invites travelers to savor the journey and enjoy its scenic drives with views of the Salish Sea, Texada, Lasqueti and Vancouver Islands.

Stop in to some of the quaint coastal towns like Sechelt, Secret Cove or Halfmoon Bay on your way to a second ferry at Earls Cove. Before departing, detour to Egmont and hike to Skookumchuck Narrows Provincial Park to see an incredible natural phenomenon. Here, the Sechelt Rapids surge through the Narrows during a 3 m (10 ft) tide change twice daily. The change causes 200 billion gallons of water to explode upwards into standing waves and be sucked into churning whirlpools. This is a popular for experienced kayakers and surfers, and those who enjoy aquatic thrills.

Continuing north, the funky and historic town of Powell River awaits exploration. Sample the delights of BC’s Ale Trail with a craft brew at Townsite Brewing, or stop in for delicious pasta and pizza dishes at Culaccino Modern Italian. The road ends in tiny, historic Lund for a stay at the Lund Resort at Klah Ah Men. Don’t miss the cinnamon buns at Nancy’s and terrific fish and chips and amazing sunsets at the Boardwalk Restaurant before continuing a marine journey into Desolation Sound.

Make the journey your destination and take the road less travelled into the Fraser Valley along Highway 7. This is one of the more relaxed and scenic drives in BC. From Vancouver, the route heads eastward towards Harrison Hot Springs, following the mighty Fraser River. The road winds past the crowded suburbs of Coquitlam and Maple Ridge, then opens up to a sprawling landscape of farms, forests and the smaller communities of Agassiz, Harrison Mills, and Harrison Hot Springs.

Discover charming cottages and an English-style manor house at Rowena’s on the River, nestled along the Harrison River. Go back in time to BC’s rural past at the Kilby Historic Site at Harrison Mills before venturing to the village of Harrison Hot Springs in search of the elusive Sasquatch and the opportunity to soak in the healing mineral hot springs public pool.

Stay at the Harrison Beach Hotel and enjoy views of Harrison Lake, walk or bike the Lakeside Trail, pop into the Sasquatch Museum, take a Circle Farm Tour of the region, hike the spirit Trail or Heritage Walk, and dine at local favorites, Muddy Waters Restaurant, Morgan’s Bistro or the German cuisine-inspired Black Forest Restaurant.

This scenic highway in eastern British Columbia showcases the Kootenay Rockies in their winter finery. The Powder Highway along BC Highway 95A connects eight major ski resorts, small mountain towns and hot springs, creating a winter wonderland for skiers and snow lovers.

Few travelers have the entire winter to explore every mountain resort in depth, so it’s best to plan a trip to this powder paradise in sections over several winter seasons.

Starting in Cranbrook, in eastern British Columbia, the 850 km Hot Springs Route shares similarities of route and location to the winter sports-focused Powder Highway (see above). Driving the entire scenic loop through Creston, Nakusp, Revelstoke, Golden and can take seven days if you choose to stop and soak in the seven hot springs through the BC Kootenay Rockies. Which of course, you must. I mean, seven days, seven hot springs, right?

In addition to hot springs like Fairmont, Radium and Ainsworth Hot Springs, this route also showcases incredible mountain wildlife, Kootenay National Park, Mount Revelstoke, and the Creston Valley Wildlife Management Area. Stop in the village of New Denver on Slocan Lake, to visit the Nikkei Internment Memorial Centre. This museum and National Historic Site is dedicated to the history of the internment of Japanese Canadians during World War II.

Discover the fertile Okanagan valley, home to British Columbia’s largest wine region and only desert. This drive along Highway 97 showcases some of the warmest lakes in the country and rolling desert hills dotted with wineries and neat rows of green vines.

Starting in Osoyoos, enjoy a refreshing dip in BC’s warmest body of water, Lake Osoyoos, before touring the First Nations Nk’Mip Desert Cultural Centre. Pass rows of symmetrical grapevines and pull in for some wine tastings at Rust, Culmina, Checkmate, vinAmité and Road 13 along the the Golden Mile Bench between Osoyoos and Oliver. Be sure to stop at local fruit stands along the way for snacks and seasonal produce like cherries, apricots and peaches during summer.

Keep a sharp eye out for the legendary Ogopopo in Lake Okanagan on route to Kelowna and more wine tastings at Cedar Creek Winery or St. Hubertus, as well as craft cocktails and pizza at Jack’s Pizza, and hand-crafted artisanal gelato at QB Gelato. Vernon and Lake Country await at the top end of this route, with its walkable downtown, can’t miss donuts at Ratio Coffee & Pastry, and outdoor activities, including paddle boarding and wake boarding on Kalamalka Lake.

Prepare for epic vistas of lakes, trees, mountains and wildlife along BC Highway 97, better known as the Alaska Highway. This feat of engineering winds its way north, linking small towns and vast landscapes as one of the ultimate drives in BC.

Stop at Liard River Hot Springs Provincial Park to camp and soak in the nearby hot pools, which are the second largest in Canada. As always, keep watch for the spectacular wildlife, including moose, wolves, eagles, bighorn sheep, grizzly and black bears.

The highway crosses into the Yukon at Watson Lake, where travelers continue towards the territory capital of Whitehorse. This former gold rush town hosts a variety of arts, culture and natural attractions, including; the MacBride Museum, the Yukon Beringia Interpretive Centre, Miles Canyon basalt cliffs, the restored S.S. Klondike sternwheeler, and the Takhini Hot Pools.

Looking to continue north for an Alaska road trip? Check out my friends’ Mike and Anne’s awesome road trip adventures.

Do you have a favorite driving route in British Columbia? Share it below. 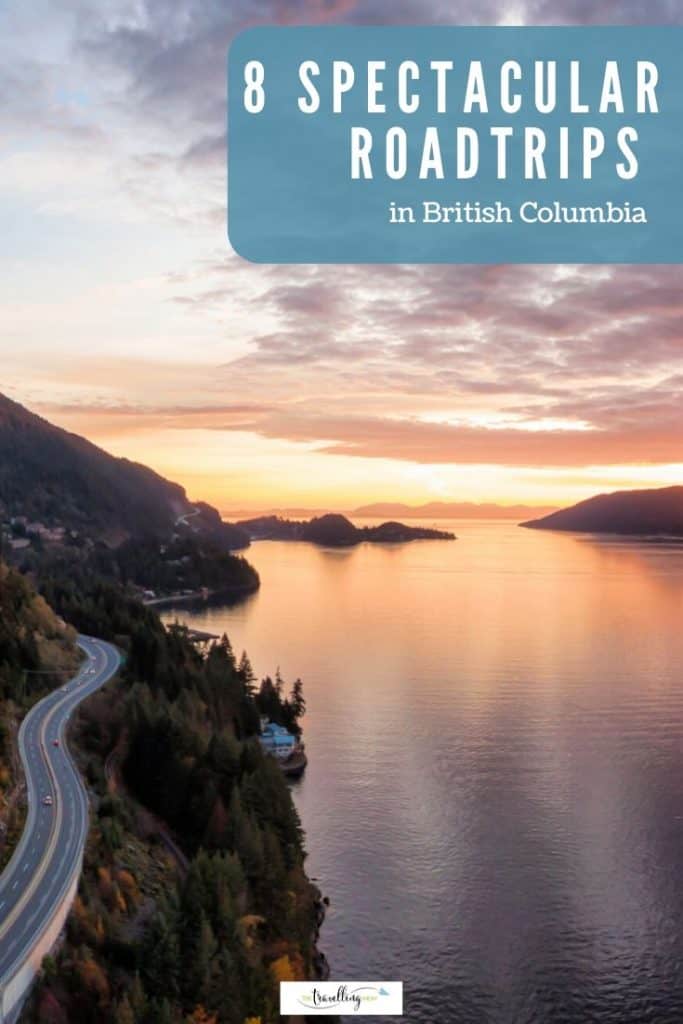